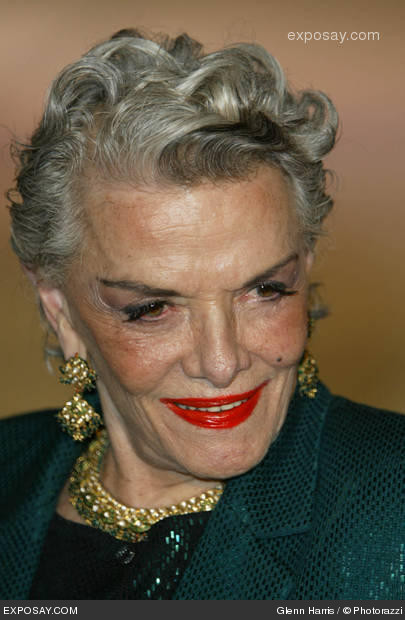 Jane Russell, the Hollywood siren of the 1940s and 1950s and star of Gentlemen Prefer Blondes alongside Marilyn Monroe, has died at the age of 89.

Jane Russell, the Hollywood siren of the 1940s and 1950s and star of Gentlemen Prefer Blondes alongside Marilyn Monroe, has died at the age of 89. She died at her home in Santa Maria, California of a respiratory-related illness, according to her daughter-in-law Etta Waterfield.

Russell shot to fame in 1943 after Howard Hughes, the eccentric billionaire, discovered her and cast her in his controversial western, The Outlaw. The movie gained notoriety after censors kept the film from general release in a dispute over Russell's cleavage. Adverts for the film showed the star sprawled on a bale of hay with the tag line "How'd you like to tussle with Russell?"

"Yes, Howard Hughes invented a bra for me. Or, he tried to. And one of the seamless ones like they have now. He was ahead of his time. But I never wore it in The Outlaw. And he never knew. He wasn't going to take my clothes off to check if I had … " Russell said.

The film set the tone for a career in films that majored on her figure and talent for light comedy. Russell appeared in dozens of films and theatrical productions and wrote an autobiography in 1985 called My Path and Detours. Her biggest box-office hits were Paleface, a comedy western with Bob Hope, and Gentlemen Prefer Blondes.

She made only a handful of films after the 1960s but remained active in her church, with charitable organisations and with a local singing group.

Her health began to decline just a couple of weeks ago, her daughter-in-law told Associated Press. "She always said 'I'm going to die in the saddle, I'm not going to sit at home and become an old woman'," Waterfield said. "And that's exactly what she did, she died in the saddle."

Jane Russell was born Ernestine Jane Geraldine Russell on June 21, 1921, in Bemidji, Minnesota. Her mother was a lay preacher. Russell showed a wild side from an early age and admitted to back street abortions and struggles with alcoholism. In later life she was a committed Republican and leader of the Hollywood Christian Group.

"These days I am a teetotal, mean-spirited, right-wing, narrow-minded, conservative Christian bigot, but not a racist," she once said. Asked about today's liberal stars George Clooney and Sean Penn, she said: "I think they're not well."

Her abortions left her unable to conceive and after experiencing problems adopting, she founded World Adoption International Agency. Russell is survived by three children, six grandchildren and 10 great-grandchildren.