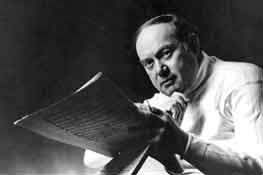 Sidney Harth, one of the most accomplished concertmasters of the 20th century, with a major career as a conductor and pedagogue as well, died today in Shadyside Hospital from respiratory complications. He was 86.

Born in Cleveland, Mr. Harth studied at the Cleveland Institute of Music. After graduation, his multifaceted career saw success after success.

An accomplished violinist, in 1957 Mr. Harth became the first American to receive the Laureate Prize in Poland's Wieniawski Violin Competition. But rather than take a solo career, he gravitated toward orchestras, leading to one of the great careers as a concertmaster.

Among many engagements were positions such as associate conductor of the Los Angeles Philharmonic; music director of the Jerusalem and Puerto Rico symphony orchestras; and principal conductor of the Natal Symphony Orchestra in Durban, South Africa.

/p>He is survived by a daughter, Laura Rodriguez, of Shadyside.

The funeral, arranged by Rapp Funeral Home, will be held at 10 a.m. Friday at Homewood Cemetery Chapel.