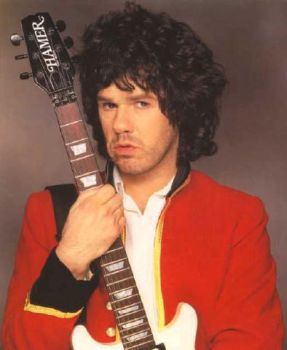 Hot Press has learned of the death of Gary Moore. The legendary Belfast-born guitarist died in his sleep last night, while on holiday in Spain.

One of the greatest players of his generation, Gary Moore began his professional career in his teens. He was still only sixteen years of age when he moved from Belfast to Dublin in 1969, to join Skid Row â€“ originally a four-piece that featured Brush Shiels on bass, Nollaig Bridgeman on drums and Philip Lynott as lead vocalist, as well as Gary on lead guitar.

Soon afterwards, Philip Lynott was sidelined, with Brush and Gary sharing vocals, turning Skid Row into a power-trio of the kind that was in vogue at the time, following on the success of Rory Gallagher's Taste and the Jimi Hendrix Experience. Skid Row were signed to CBS Records and released two albums, Skid in 1970 and 34 Hours in 1971.

Adept at blues, hard rock and jazz, Moore was also a superb, lyrical, melodic guitar player and featured on a number of other Irish albums in cameo roles, including records by Dr.Strangely Strange among others. He was drafted into Thin Lizzy by Philip Lynott to replace the departing Eric Bell, before the formation of the definitive 4-piece Lizzy line-up, with Scott Gorham and Brian Robertson on twin lead guitars. However, on the Nightlife album (1974), he played the extraordinary solo on 'Still In Love With You', which became one of Thin Lizzy's most enduring tracks and a perennial live favourite. Gary returned to the Lizzy line-up briefly again, when Brian Robertson was ruled out of a US tour in 1977. Moore also featured on the Lizzy album Black Rose, released in 1979.

"He was a genius player," Hot Press editor Niall Stokes said. "Even as a teenager, he had something special about him and throughout his career he worked really hard at improving his technique. His contribution to the Irish rock canon was immense, both in his own solo work, his days with Skid Row, the great records he recorded with Philip Lynott and with Thin Lizzy and in various other cameos. My heart goes out to all of his close friends and family. It is a huge loss."

While his relationship with Lizzy lead singer and songwriter Philip Lynott was hugely competitive, and there were often disagreements between them, they remained musical cohorts, and joined forces for the hit single 'Parisienne Walkways' (1979) on which Philip sang and the later single, 'Out In The Fields' (1985), which reached No.5 in the UK charts.

While he featured along the way as part of Jon Hiseman in Colosseum II, for most of his career Gary Moore led his own band, shifting between hard rock, metal, jazz-influenced fusion music and the blues. The first Gary Moore Band LP, Grinding Stone, was released in 1973. In recent years he had returned to his roots, first with the release of Still Got The Blues in 1991 and later with Back To The Blues, in 2001. In all, he released 20 studio albums, as well as six live collections, including the Live At Montreaux DVD.