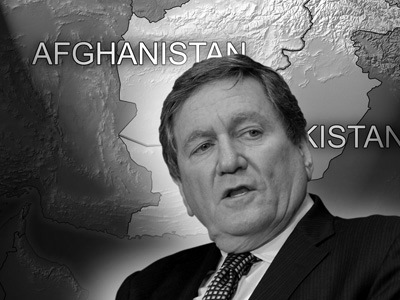 WASHINGTON – Richard Holbrooke, a brilliant and feisty U.S. diplomat who wrote part of the Pentagon Papers, was the architect of the 1995 Bosnia peace plan and served as President Barack Obama's special envoy to Pakistan and Afghanistan, died Monday, the State Department said. He was 69.

Calling Holbrooke "a true giant of American foreign policy," Obama paid homage to the veteran diplomat as "a truly unique figure who will be remembered for his tireless diplomacy, love of country, and pursuit of peace." Holbrooke deserves credit for much of the progress in Afghanistan and Pakistan, the president said.

Holbrooke, whose forceful style earned him nicknames such as "The Bulldozer" and "Raging Bull," was admitted to the hospital on Friday after becoming ill at the State Department. The former U.S. ambassador to the U.N. had surgery Saturday to repair a tear in his aorta, the body's principal artery.

Secretary of State Hillary Clinton called Holbrooke one of America's "fiercest champions and most dedicated public servants."
"Richard Holbrooke served the country he loved for nearly half a century, representing the United States in far-flung war zones and high-level peace talks, always with distinctive brilliance and unmatched determination," Clinton said.

Holbrooke served under every Democratic president from John F. Kennedy to Obama in a lengthy career that began with a foreign service posting in Vietnam in 1962 after graduating from Brown University, and included time as a member of the U.S. delegation to the Paris Peace Talks on Vietnam.

"If Richard calls you and asks you for something, just say yes," former Secretary of State Henry Kissinger once said. "If you say no, you'll eventually get to yes, but the journey will be very painful."

He learned to become extremely informed about whatever country he was in, push for an exit strategy and look for ways to get those who live in a country to take increasing responsibility for their own security.
"He's a bulldog for the globe," Tim Wirth, president of the United Nations Foundation, once said.

The bearish Holbrooke said he has no qualms about "negotiating with people who do immoral things."

"If you can prevent the deaths of people still alive, you're not doing a disservice to those already killed by trying to do so," he said in 1999.

Born in New York City on April 24, 1941, Richard Charles Albert Holbrooke had an interest in public service from his early years. He was good friends in high school with a son of Dean Rusk and he grew close to the family of the man who would become a secretary of state for presidents Kennedy and Johnson.

Holbrooke was a young provincial representative for the U.S. Agency for International Development in South Vietnam and then an aide to two U.S. ambassadors in Saigon. At the Johnson White House, he wrote one volume of the Pentagon Papers, an internal government study of U.S. involvement in Vietnam that was completed in 1967.

The study, leaked in 1971 by a former Defense Department aide, had many damaging revelations, including a memo that stated the reason for fighting in Vietnam was based far more on preserving U.S. prestige than preventing communism or helping the Vietnamese.

After stints in and out of government — including as Peace Corps director in Morocco, editing positions at Foreign Policy and Newsweek magazines and adviser to Jimmy Carter's presidential campaign — Holbrooke became assistant secretary of state for Asian affairs from 1977-81. He then shifted back to private life — and the financial world, at Lehman Brothers.

A lifelong Democrat, he returned to public service when Bill Clinton took the White House in 1993. Holbrooke was U.S. ambassador to Germany from 1993 to 1994 and then assistant secretary of state for European affairs.

One of his signature achievements was brokering the Dayton Peace Accords that ended the war in Bosnia. He detailed the experience of negotiating the deal at an Air Force base near the Ohio city in his 1998 memoir, "To End a War."