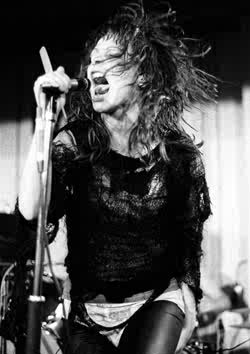 Ari Up, the dreadlocked lead singer of the Slits, the first all-girl U.K. punk band, died Oct. 20 in England. She was 48.

posting on the website of Sex Pistols vocalist John Lydon (aka Johnny Rotten), who is married to Up's mother, Nora Forster, said the vocalist passed away after a serious illness.

Born Arianna Forster in Munich, Up founded the four-piece Slits, probably in the early days of London's punk ferment in 1976. Its original line-up included drummer Palmolive (Paloma Romero, then the girlfriend of the Clash's Joe Strummer and later a member of the Raincoats), guitarist Viv Albertine (girlfriend of the Clash's Mick Jones, and subject of the band's "Train in Vain"), and bassist Tessa Pollitt.

Heavily influenced by reggae, the band made its 1979 debut album "Cut" with Jamaican producer Dennis Bovell; future Siouxsie and the Banshees' drummer Budgie was enlisted to drum on the set after Palmolive's exit. Released by Island's Antilles subsidiary, the LP was notorious for its cover, which depicted the bare-breasted female band mates covered in mud.

After a second album, "Return of the Giant Slits" (1981), the group disbanded. Up went on to perform with producer Adrian Sherwood's dub-oriented New Age Steppers and solo under such handles as Baby Ari and Madussa.

Up reconvened the Slits with Pollitt in 2005; the group released the EP "Revenge of the Killer Slits" in 2006 and the album "Trapped Animal" in 2009.