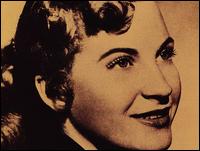 In a 43-year career, she performed around the world, including at New York's Carnegie Hall and London's Royal Albert Hall. She earned five Grammy nominations, including one for the song ``Set Him Free'' in 1959, the year she joined the Opry.

Davis was born Mary Frances Penick in Dry Ridge, Kentucky, and started performing early with singer Betty Jack Davis as The Davis Sisters. She went solo after Davis was killed in a car crash.