Bob Sheppard, Voice of the Yankees, Dies at 99 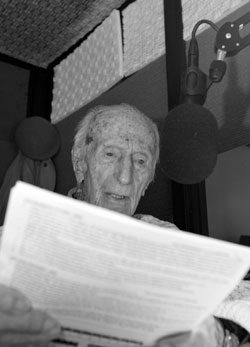 Bob Sheppard, whose elegant intonation as the public-address announcer at Yankee Stadium for more than half a century personified the image of Yankee grandeur, died Sunday at his home in Baldwin, on Long Island. He was 99. His death was confirmed by his son, Paul.


From the last days of DiMaggio through the primes of Mantle, Berra, Jackson and Jeter, Sheppard’s precise, resonant, even Olympian elocution — he was sometimes called the Voice of God — greeted Yankee fans with the words, “Good afternoon, ladies and gentlemen, and welcome to Yankee Stadium.”

“The Yankees and Bob Sheppard were a marriage made in heaven,” said his son Paul Sheppard, a 71-year-old financial adviser. “I know St. Peter will now recruit him. If you’re lucky enough to go to heaven, you’ll be greeted by a voice, saying, ‘Good afternoon, ladies and gentlemen. Welcome to heaven!’ ”

In an era of blaring stadium music, of public-address announcers styling themselves as entertainers and cheerleaders, Sheppard, a man with a passion for poetry and Shakespeare, shunned hyperbole.

“A public-address announcer should be clear, concise, correct,” he said. “He should not be colorful, cute or comic.”

Sheppard was also the public-address announcer for the football Giants from 1956 through 2005, first at Yankee Stadium and then at Giants Stadium in the Meadowlands.

He signed a new two-year contract with the Yankees in March 2008 but was not at the stadium that season, when he was recovering from illness that brought a severe weight loss. His longtime backup, Jim Hall, replaced him.

Sheppard did not feel strong enough to attend the ceremonies marking the final game at the old Yankee Stadium on Sept. 21, 2008, but he announced the Yankee starting lineup that night in a tape recording. During the season, his recorded voice had introduced Derek Jeter at the plate, a touch the Yankee captain requested to honor Sheppard.

Sheppard was chairman of the speech department at John Adams High School in Queens and an adjunct professor of speech at St. John’s University while becoming a New York institution as a public-address announcer.

“I don’t change my pattern,” he once said. “I speak at Yankee Stadium the same way I do in a classroom, a saloon or reading the Gospel at Mass at St. Christopher’s.”

“It’s the organ at church,” O’Neill told The Record of Hackensack, N.J. “Certain sounds and certain voices just belong in places. Obviously, his voice and Yankee Stadium have become one.”

Robert Leo Sheppard, who was born on Oct. 20, gained a passion for his calling while growing up in Queens.

“My father, Charles, and my mother, Eileen, each enjoyed poetry and music and public speaking,” Sheppard told Maury Allen in “Baseball: The Lives Behind the Seams.”

“They were very precise in how they spoke. They measured words, pronounced everything carefully and instilled a love of language in me by how they respected proper pronunciation.”

While he was in high school, two Vincentian priests put him on the path toward a career in speech education.

“The combination there of one, the fiery orator, and the other, the semantic craftsman, probably presented a blending I wanted to imitate,” he once recalled.

Sheppard earned a bachelor’s degree in English and speech at St. John’s and a master’s degree in speech from Columbia before serving as a Navy officer during World War II.

He became a speech teacher at John Adams upon his return and served as the public-address announcer for the Brooklyn Dodgers and New York Yankees of the All-America Football Conference.

He was hired by the baseball Yankees in 1951, and soon fans were hearing Sheppard’s pronunciation of “Joe Di-Mah-ggio.”

“I take great pride in how the names are pronounced,” Sheppard said. He seldom entered the clubhouses, but made certain to check directly with a visiting player if he had any doubt on the correct way to pronounce his name.

He enjoyed announcing the name of the Japanese pitcher Shigetoshi Hasegawa and the names of Latin players, particularly pitcher Salome Barojas and infielder Jose Valdivielso.

Sheppard feared he would trip over his pronunciation of Wayne Terwilliger, an infielder who played at Yankee Stadium with the Washington Senators and Kansas City Athletics in the 1950s. “I worried that I would say ‘Ter-wigg-ler’ but I never did,” he remembered.

But there was at least one flub.

When the football Giants played their first game at the Meadowlands, against the Dallas Cowboys in October 1976, Sheppard told the crowd: “Welcome to Yankee Stadium.”

On Bob Sheppard Day -- during his 50th year with the Yankees -- he was honored at a home-plate ceremony in which Walter Cronkite read the inscription on the plaque being unveiled for Monument Park behind the left-field fence. It stated in part that Sheppard “has announced the names of hundreds of players -- both unfamiliar and legendary -- with equal divine reverence.”

He leaves behind his second wife, Mary, two sons, Paul and Chris, and two daughters, Barbara and Mary. His first wife, Margaret, the mother of all four children, died in 1959. He also leaves four grandchildren.

Sheppard had his imitators, most notably the ESPN broadcaster Jon Miller.

“One day when my wife and I were down in St. Thomas, we went into a restaurant,” Sheppard told The Village Voice in 2002. “I told the waitress, ‘I’ll have the No. 1. Scrambled eggs, buttered toast and black coffee. No. 1.’ “My wife looked at me and said. ‘You sound like Jon Miller’s imitation.’ I wasn’t conscious of the fact that I was ordering the same way I’d introduce Billy Martin.”