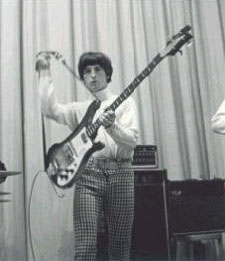 Former Kinks bassist Pete Quaife has passed away aged 66, it has been confirmed.


It is not clear how he died, but the star been undergoing kidney dialysis for over a decade.

The musician played on the band's earlier hits including You Really Got Me, All Day and All of the Night and Dedicated Follower of Fashion.

A co-founder of the group, Quaife played with them for five years before leaving in 1969.

He had been quoted as saying how unhappy he was during his time in the Kinks, not least because of the fractious relationship between brothers Ray and Dave Davies.

But he also proudly recalled his work on the band's landmark Village Green Preservation Society album.

"Making that album was the high point of my career," he told Jukebox magazine in 2006.

"For me it represents the only real album made by the Kinks... in which we all contributed something."

After leaving in 1969, Quaife was replaced by John Dalton, who had previously filled in for him when he broke his leg in a car accident.

Several months after quitting, he formed another band, called Mapleoak, but it failed to match the success of the Kinks.

He teamed up with his former bandmates for a one-off concert in Canada in 1981, but a much-vaunted renunion never came to fruition.