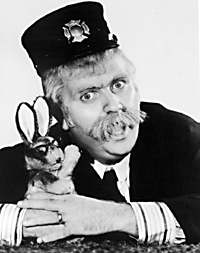 The show ran on CBS from 1955 to 1985, and then moved to public television for six more years.

Shows were frequently interrupted with silliness, such as hundreds of ping-pong balls dropping from the ceiling or Mr. Moose's knock-knock jokes, but the mainstay was Keeshan, who chatted with Brannum and told stories.