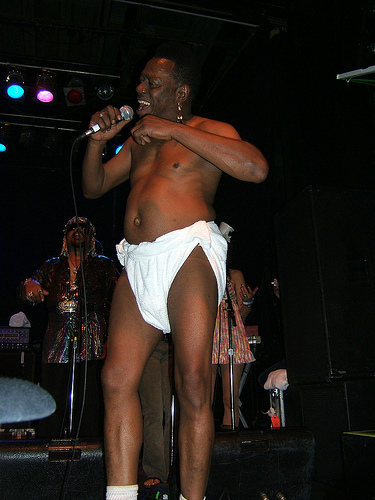 TRENTON, N.J.—Garry Shider, the longtime musical director of Parliament-Funkadelic whose funky guitar work, songwriting skills and musical arrangements thrilled fans around the globe and earned him a spot in the Rock and Roll Hall of Fame, has died. He was 56.

Shider, who died Wednesday at his home in Upper Marlboro, Md., was known to millions of fans as "Starchild" or "Diaperman," the latter because of the loincloth he often wore onstage.

Shider's son, Garrett, said Thursday that his father had been diagnosed with brain and lung cancer in late March. He then briefly went out on tour one last time but had to stop because of his failing health.

"He was a beautiful man who had a beautiful heart, who loved his fans just as much as they loved him," Garrett Shider said. "I'm sure if he had the choice, he would have passed on a tour bus, because he loved playing music, playing for the fans."

A New Jersey native, Shider started his musical career as a young boy, performing mostly gospel music in churches in a group that included his brother and was overseen by their father. The band also played backup for many prominent gospel artists when they performed concerts in the area, but Shider's musical taste soon grew more diverse.

The teenager first met P-Funk mastermind George Clinton in the late 1960s at a Plainfield barbershop Clinton owned, where future P-Funk members would sing doo-wop for customers and counsel local youths. Then, when he was around 16, Shider and a friend went to Canada, where they formed a funk/rock band called United Soul, or "U.S."

Clinton, who was living in Toronto at the time, heard about the band from people in the local music business, and took the band under his wing upon learning that Shider was a member. He helped produce some of their songs and eventually invited Shider to join P-Funk, a combination of two bands, Parliament and Funkadelic.

Shider soon became a mainstay of Clinton's wide-ranging musical family, eventually serving as its musical director and co-writing some of Parliament-Funkadelic's biggest hits.

"Thank you, Garry for all you have done. Forever funkin' on!" Clinton noted in a message posted on his website.

Shider first appeared on Funkadelic's 1971 album "Maggot Brain" and Parliament's second album "Up for the Down Stroke," and joined P-Funk for good in 1972. He became one of Clinton's most trusted lieutenants, co-writing and providing vocals on some of the band's biggest hits -- including "Atomic Dog," "Cosmic Slop," "Can You Get to That" and "One Nation Under the Groove."

He also toured with P-Funk for many years and was still considered an active member of the group. He also was among 16 members -- including Clinton -- who were inducted into the Rock and Roll Hall of Fame in 1997, winning recognition for their musicianship, politically charged lyrics, outlandish concept albums and memorable live performances.

"My dad left home when he was about 16 years old, and wouldn't come back until he had a hit. He obviously accomplished that goal and did so much more," said Garrett Shider, who recently formed an entertainment company and hopes to produce a movie on his father's life. "People know about his talent, but I want them to know about the great man he was."

Barbara Thomas, part of a group that is raising money to help Shider's family cover his medical bills, said she was "truly heartbroken" over his death. She said upcoming benefit concerts in New York and New Jersey would go on as planned.

"Over the past forty years, Garry put his stamp and signature of everything he did musically," stated a message posted on the group's website, http://www.garryshidermedicalfund.com. "His talent was and always will be unmatched."