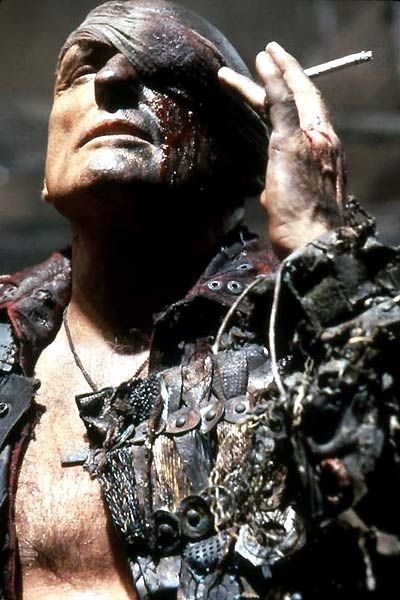 Actor had praised Hollywood as his 'home and my schooling'

LOS ANGELES — Hollywood actor Dennis Hopper, best known for directing and starring in the 1969 cult classic "Easy Rider," died on Saturday at his home in Venice, California, from complications of prostate cancer, a friend told Reuters. Hopper was 74.

The two-time Oscar nominee, who appeared in more than 100 films, last March got a star on Hollywood's Walk of Fame, saying he came to Hollywood from his native Kansas at 18, "so that was my college."

"Everything I’ve learned, I’ve learned from Hollywood," he said. "This has been my home and my schooling."

In a wildly varied career spanning more than 50 years, Hopper appeared alongside his mentor James Dean in "Rebel Without a Cause" and "Giant" in the 1950s and played maniacs in such films as "Apocalypse Now," "Blue Velvet" and "Speed."

He received two Oscar nominations — for writing "EasyRider" (with co-star Peter Fonda and Terry Southern), and for a rare heartwarming turn as an alcoholic high-school basketball coach in the 1986 drama "Hoosiers."

"Easy Rider," regarded is one of the greatest films of American cinema, helped usher in a new era in which the old Hollywood guard was forced to cede power to young filmmakers such as Francis Ford Coppola and Martin Scorsese.

"We'd gone through the whole '60s and nobody had made a film about anybody smoking grass without going out and killing a bunch of nurses," Hopper told Entertainment Weekly in 2005. "I wanted 'Easy Rider' to be a time capsule for people about that period."

Hopper and Fonda were joined on screen by a then-unknown Jack Nicholson as an alcoholic lawyer, but it was not a harmonious set. Hopper clashed violently with everyone and Fonda later described him as a "little fascist freak." Their friendship was destroyed.

Hopper fell ill last September. He continued working almost to the very end, both on his cable TV series "Crash" and on a book showcasing his photography. But his final months were also consumed by a bitter divorce battle with his fifth wife, Victoria Duffy.

Indeed, his private life was never dull. His marriages included an eight-day union in 1970 with Michelle Phillips of the Mamas and Papas, who later told Vanity Fair that she was subjected to "excruciating" treatment.

Hopper is survived by four children.