Owner of chimp that attacked friend dies at 72 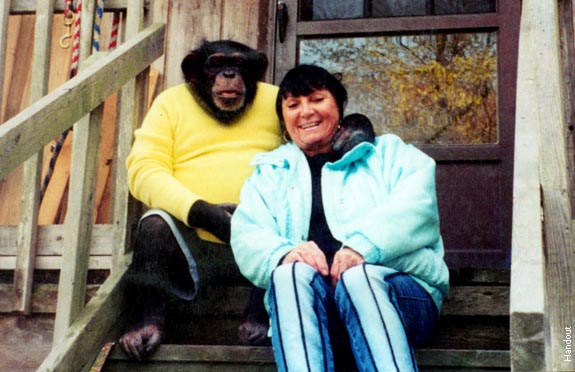 Sandra Herold, the owner of a chimpanzee that was involved in a vicious attack on her friend last year, has died, her attorney said Tuesday. She was 72.

Herold "had suffered a series of heartbreaking losses over the last several years, beginning with the death of her only child, then her husband, then her beloved chimp Travis, as well as the tragic maiming of friend and employee Charla Nash," Golger said.

Nash lost her nose, upper and lower lips, eyelids and both her hands in the attack in February 2009, as well as the "bony structures in her mid-face," according to doctors.

More than a year later, numerous surgeries and therapy sessions have helped Nash regain some mobility.

Her family filed a lawsuit against Herold shortly after the attack, seeking $50 million in damages. Criminal charges were not filed, however, because authorities ruled Herold was not aware of the risk her pet posed.

"This past year was particularly difficult for Sandy," Golger said. "She hated living alone in a house where she faced constant reminders of the vibrant and happy life she once led with her family and friends. The stress of defending a multimillion-dollar lawsuit and all that it entailed also weighed heavy on Sandy. In the end, her heart, which had been broken so many times before, could take no more."

The attack occurred February 16, 2009, when Herold called Nash for help in getting Travis back inside her house after he used a key to escape. When Nash arrived at the Stamford, Connecticut, home, the chimp, who had been featured in TV commercials for Coca-Cola and Old Navy, jumped on her and began biting and mauling her. Police shot Travis to halt the attack and he later died of gunshot wounds.

The mauling has raised questions about whether exotic animals should be kept as pets. Connecticut Attorney General Richard Blumenthal has said that primates and crocodiles should be added to a state list of animals that citizens are not allowed to own.