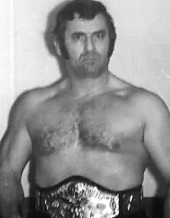 During his career he was known for hiding a foreign object that he used to gain the upper hand against his opponents.

He would play a sort of shell game with the referee, concealing the object -- said to be a roll of quarters -- in his trunks or boots while the crowd went wild.

"He played the role well. Those who didn't know him thought that's who he was," said his son, Michael. "But he couldn't have been more different in real life than he was in the ring. He was a quiet man who enjoyed his family and who liked to travel."

A native of the Isle of Malta, a fact that was part of his ring introductions, Mr. Scicluna was inducted into the World Wrestling Federation Hall of Fame in 1996.

He was a frequent performer on channel 11's Studio Wrestling, and was a ring rival of Bruno Sammartino in the 1960s. In two heavyweight title matches at Madison Square Garden, Mr. Scicluna lost on a disqualification and a pin.

The two men were friends, and Mr. Scicluna was supposed to be part of Thursday's festivities during which Sammartino will be presented with the Dapper Dan Lifetime Achievement Award.