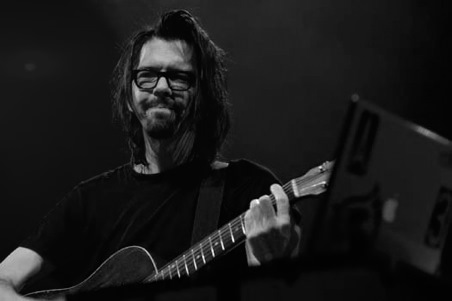 Mark Linkous, a singer and songwriter whose music, released under the name Sparklehorse, was renowned in indie-rock and alt-country circles for its haunted, allusive themes and fragile beauty, committed suicide on Saturday in Knoxville, Tenn. He was 47.

He shot himself in the heart in an alley outside a friend’s home, said his manager, Shelby Meade. Lt. Greg Hoskins of the Knoxville Police Department confirmed that the police responded to a call at 1:20 p.m., and that Mr. Linkous was pronounced dead at the scene. According to his family, Mr. Linkous owned the gun that he used.

On four Sparklehorse albums, released between 1995 and 2006, and in numerous collaborations, Mr. Linkous developed a style that sent sunny, Beatles-esque melodies through a filter of crackling, damaged folk-rock, and his songs were filled with entropic imagery. “Everything that’s made is made to decay,” he sang in a whispery tenor on Sparklehorse’s debut album, “Vivadixiesubmarinetransmissionplot” (Capitol).

Frederick Mark Linkous was born in Arlington, Va., in 1962 to a family with roots in the coal-mining country of southwestern Virginia. After graduating from high school he moved to New York City and started the band the Dancing Hoods, which relocated to Los Angeles in pursuit of mainstream rock success. But disillusioned with the music business, Mr. Linkous returned to Virginia and reinvented his sound as Sparklehorse, a name that he applied to himself as well as his band.

“We were trying so hard to get signed, and I just quit and came back home and just gave up on all those aspirations of being a rock star,” he said in an interview in 1999. “That’s when I started making good music.”

While on tour in 1996, Mr. Linkous collapsed in a hotel room after taking Valium and antidepressants. He briefly went into cardiac arrest before being revived, and he sustained injuries to his legs that put him in a wheelchair for six months. His legs never fully recovered their strength. His convalescence inspired “St. Mary,” a song on his second album named after the hospital where he recuperated. “Come on boys,” he sings, “please let me taste the clean air in my lungs.”

Mr. Linkous was also in demand as a producer, working with the singer Daniel Johnston and the Swedish singer (and member of the Cardigans) Nina Persson, among others. He collaborated with Danger Mouse and the director David Lynch on “Dark Night of the Soul,” an album and photo book whose scheduled release last year was delayed by legal entanglements; last week Danger Mouse announced that those problems had been worked out and that the album would be released soon.

Mr. Linkous had recently completed most of the work for a new Sparklehorse album and was in the process of moving to Knoxville and setting up a studio to complete the record, said Ms. Meade, his manager.