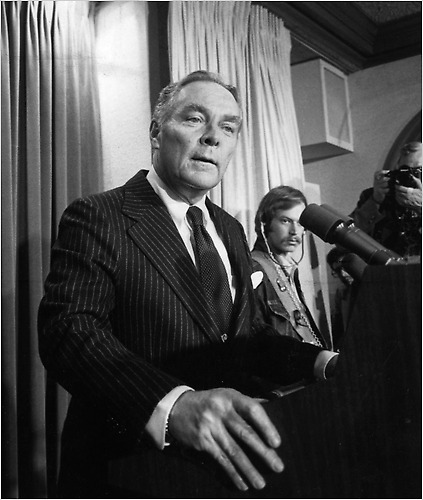 Alexander M. Haig Jr., the mercurial four-star general who served as a confrontational secretary of state under President Ronald Reagan and a commanding White House chief of staff as President Richard M. Nixon’s administration crumbled, died Saturday in Baltimore. He was 85.

He had been admitted to Johns Hopkins Hospital on Jan. 28, said Gary Stephenson, a hospital spokesman, and died there at approximately 1:30 a.m.

Mr. Haig was a rare American breed: a political general. His bids for the presidency quickly came undone. But his ambition to be president was thinly veiled, and that was his undoing. He knew, Reagan’s aide Lyn Nofziger once said, that “the third paragraph of his obit” would detail his conduct in the hours after President Reagan was shot, on March 30, 1981.

That day, Secretary of State Haig wrongly declared himself the acting president. “The helm is right here,” he told members of the Reagan cabinet in the White House Situation Room, “and that means right in this chair for now, constitutionally, until the vice president gets here.” His words were tape-recorded by Richard V. Allen, then the national security adviser. His colleagues knew better. “There were three others ahead of Haig in the constitutional succession,” Mr. Allen wrote in 2001. “But Haig’s demeanor signaled that he might be ready for a quarrel, and there was no point in provoking one.”

Mr. Haig then asked, “How do you get to the press room?” He raced upstairs and went directly to the lectern before a television audience of millions. His knuckles whitening, his arms shaking, his knees wobbling, Mr. Haig declared to the world, “I am in control here, in the White House.” He did not give that appearance.

Seven years before, Mr. Haig really had been in control. He was widely perceived as the acting president during the final months of the Nixon administration.

He kept the White House running as the distraught and despondent commander in chief was driven from power by the threat of impeachment in 1974. “He was the president toward the end,” William Saxbe, the United States attorney general in 1974, told the authors of “Nixon: An Oral History of His Presidency,” (HarperCollins, 1994). “He held that office together.”

Henry Kissinger, his mentor and master in the Nixon White House, also said the nation owed Mr. Haig its gratitude for steering the ship of state through dangerous waters in the final days of the Nixon era. “By sheer willpower, dedication and self-discipline, he held the government together,” Mr. Kissinger wrote in his memoir, “Years of Upheaval.”

He took pride in his cool handling of a constitutional crisis without precedent. “There were no tanks,” he said during his confirmation as secretary of state in 1981. “There were not any sandbags outside the White House.”

Serving the Nixon White House from 1969 to 1974, Mr. Haig went from colonel to four-star general without holding a major battlefield command, an extraordinary rise with few if any precedents in American military history. But the White House was its own battlefield in those years. He won his stars through his tireless service to the president and his national security adviser, Mr. Kissinger.

Mr. Haig never lost his will. But he frequently lost his composure as President Reagan’s secretary of state. As a consequence, he lost both his job and his standing in the American government.

Mr. Nixon had privately suggested to the Reagan transition team that Mr. Haig would make a great secretary of state. Upon his appointment, Mr. Haig declared himself “the vicar of foreign policy” — in the Roman Catholic Church, to which he belonged, the Pope is the “vicar of Christ” — but he soon became an apostate in the new administration. He alienated his affable commander-in-chief and Vice President George H. W. Bush, whose national security aide, Donald P. Gregg, described Mr. Haig as “a cobra among garter snakes.”

He served for 17 months before the president dismissed him with a one-page letter on June 24, 1982. Those months were marked by a largely covert paramilitary campaign against Central American leftists, a dramatic heightening of nuclear tensions with the Soviet Union, and dismay among American allies about the lurching course of American foreign policy. In the immediate aftermath of his departure came the deaths of 241 American soldiers in a terrorist bombing in Beirut and, two days later, the American invasion of Grenada.

“His tenure as secretary of state was very traumatic,” recalled John M. Poindexter, later President Reagan’s national security adviser, in the oral history book “Reagan: The Man and His Presidency” (Houghton Mifflin, 1998). “As a result of this constant tension that existed between the White House and the State Department about who was going to be responsible for national security and foreign policy, we got very little done.”

Mr. Haig said the president had assured him that “I would be the spokesman for the U.S. government.” But he came to believe — with reason — that the White House staff had banded against him. He blamed in particular the so-called troika of James A. Baker III, Edwin Meese, and Michael Deaver.

“Reagan was a cipher,” he said with evident bitterness. “These men were running the government.”