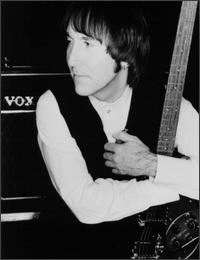 WOODLAND HILLS, Calif. – Doug Fieger, leader of the power pop band The Knack who sang on the 1979 hit "My Sharona," died Sunday. He was 57.

Fieger, a Detroit-area native, died at his home in Woodland Hills near Los Angeles after battling cancer, according to The Knack's manager, Jake Hooker.

Fieger formed The Knack in Los Angeles 1978, and the group quickly became a staple of Sunset Strip rock clubs. A year later he co-wrote and sang lead vocals on "My Sharona."

Fieger said the song, with its pounding drums and exuberant vocals, was inspired by a girlfriend of four years.

"I had never met a girl like her — ever," he told The Associated Press in a 1994 interview. "She induced madness. She was a very powerful presence. She had an insouciance that wouldn't quit. She was very self-assured. ... She also had an overpowering scent, and it drove me crazy."

"My Sharona," an unapologetically anthemic rock song, emerged during disco's heyday and held the No. 1 spot on the Billboard pop chart for six weeks, becoming an FM radio standard.

It became a pop culture phenomenon, parodied by Weird Al Yankovic and others and sampled by rap group Run DMC.

In 1994, "My Sharona" re-entered the Billboard chart when it was released as a single from the soundtrack of the Ben Stiller film "Reality Bites."

"My Sharona" gained attention again in 2005 when it was reported that George W. Bush had the song on the presidential iPod.

Their songs, about young love and teenage lust, included the hits "Good Girls Don't," "She's So Selfish" and "Frustrated."

The Knack continued to release albums and tour through the mid-2000s but they never replicated the success they enjoyed with their first two albums, "Get the Knack" and "... But the Little Girls Understand."
Fieger battled cancer for six years. In 2006 he underwent surgery to remove two tumors from his brain.

He is survived by a sister, Beth Falkenstein, and a brother, attorney Geoffrey Fieger of Southfield, Mich., who is best known for representing assisted suicide advocate Jack Kevorkian.

A Los Angeles memorial service for friends and family is being planned.