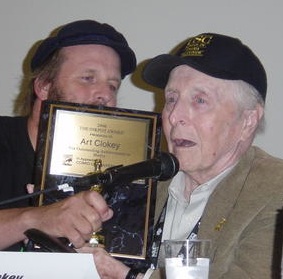 Clokey, who suffered from repeated bladder infections, died in his sleep at his home in Los Osos on California's Central Coast, son Joseph told the Los Angeles Times.

Gumby grew out of a student project Clokey produced at the University of Southern California in the early 1950s called "Gumbasia."

That led to his making shorts featuring Gumby and his horse friend Pokey for the "Howdy Doody Show" and several series through the years.

He said he based Gumby's swooping head on the cowlick hairdo of his father, who died in a car accident when Clokey was a boy. And Clokey's wife suggested he give Gumby the body of a gingerbread man.

Clokey said that though Gumby eventually became one of the most familiar toys of all time, he was at first resistant to roll out the bendable doll.

"I didn't allow merchandising for seven years after it was on the air," Clokey told San Luis Obispo Tribune in 2002, "because I was very idealistic, and I didn't want parents to think we were trying to exploit their children."

The Lutheran Church hired Clokey to make the "Davey and Goliath" shorts, and Clokey used the money to help bring a Gumby series back to television in the 1960s.

Eddie Murphy brought a surge in Gumby's popularity in the 1980s with his send-up of the character on "Saturday Night Live" as a cigar-smoking show business primadonna.

"Gumby can laugh at himself," Clokey told the Tribune.

It was only then that Clokey started seeing serious financial returns on his creation.