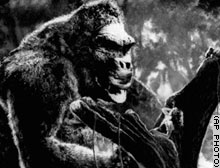 NEW YORK (AP) -- Fay Wray, who won everlasting fame as the damsel held atop the Empire State Building by the giant ape in the 1933 film classic "King Kong," has died, a close friend said Monday. She was 96.

NEW YORK (AP) -- Fay Wray, who won everlasting fame as the damsel held atop the Empire State Building by the giant ape in the 1933 film classic "King Kong," has died, a close friend said Monday. She was 96.

Wray died Sunday at her Manhattan apartment, said Rick McKay, a friend and director of the last film she appeared in. There was no official cause of death.

"She just kind of drifted off quietly as if she was going to sleep," said McKay, director of the documentary "Broadway: The Golden Age."

"She just kind of gave out."

During a career that started in 1923, Wray appeared with such stars as Ronald Colman, Gary Cooper and Spencer Tracy, but she was destined to be linked with the rampaging Kong in movie fans' minds.

"I used to resent `King Kong,' " she remarked in a 1963 interview. "But now I don't fight it anymore. I realize that it is a classic, and I am pleased to be associated with it. Why, only recently an entire issue of a French magazine was devoted to discussing the picture from its artistic, moral and even religious aspects."

She wrote in her 1988 autobiography, "On the Other Hand": "Each time I arrive in New York and see the skyline and the exquisite beauty of the Empire State Building, my heart beats a little faster. I like that feeling. I really like it!"

"King Kong" obscured the other notable films Wray made during the '30s. They included adventures "The Four Feathers" (with Richard Arlen and William Powell) and "Viva Villa" (Wallace Beery), Westerns "The Texan" (Cooper) and "The Conquering Horde" (Arlen), romances "One Sunday Afternoon" (Cooper) and "The Unholy Garden" (Colman) as well as horror films "Dr. X" and "The Mystery of the Wax Museum."

After appearing in Erich von Stroheim's 1928 silent "The Wedding March," playing a poor Viennese girl abandoned by her lover, a playboy prince, Wray became a much-employed leading lady. In 1933, the year of "King Kong," she appeared in 11 films, co-starring with Beery, George Raft, Cooper, Jack Holt and others.

In 1980, she told of her dissatisfaction with roles of that period: "In those days, the female characters never knew who their parents were. Leading ladies were not supposed to be funny but were supposed to stand there and look beautiful. That was frustrating as an actress."

In her autobiography, the actress recalled that she had been paid $10,000 for "King Kong" (budget: $680,000), but her 10 weeks' work was stretched over a 10-month period. "Residuals were not even considered, because there were no established unions to protect us," she added.

In "King Kong," she plays an unemployed actress who agrees to take a job with a movie company that is going on location to a mysterious island. Kong is the huge ape that inhabits a part of the island.

When the film company discovers him, Kong is attracted to Wray and abducts her. But he is eventually captured and brought to New York and put on display. Kong escapes and finds Wray, with terrifying results, but eventually meets his death on the Empire State Building.

She was proud that "King Kong" had saved RKO studio from bankruptcy. Of Kong she wrote: "He is a very real and individual entity. He has a personality, a character that has been compelling to many different people for many different reasons and viewpoints."

She was the guest of honor in 1991 at a ceremony marking the 60th birthday of the Empire State Building, saying that if she were mayor of New York, "I would want to run the city from this building ... and get up every morning to see the sun rise."

Although Kong appeared huge, the full figure was really only 18 inches tall. Miss Wray knew him by the arm, which was 8 feet long.

"I would stand on the floor," she recalled, "and they would bring this arm down and cinch it around my waist, then pull me up in the air. Every time I moved, one of the fingers would loosen, so it would look like I was trying to get away. Actually, I was trying not to slip through his hand."

By the late '30s, the actress was appearing in low-budget films, and she quit working in 1942 to be a wife and mother. Her first husband was John Monk Saunders, who wrote such air films as "Wings" and "The Dawn Patrol." She was 19 and he was 30 when they married. She discovered he was an alcoholic and a drug addict, and the marriage became a nightmare.

After a divorce, she married Robert Riskin, the brilliant writer of "It Happened One Night," "Lost Horizon" and other Frank Capra films. In 1950, he suffered a stroke from which he never recovered. He died five years later.

Returning to work in 1953, Wray appeared mostly in motherly roles in youth-oriented films like "Small Town Girl," "Tammy and the Bachelor" and "Summer Love." In 1979 she played opposite Henry Fonda in a TV drama, "Gideon's Trumpet."

She was born Vina Fay Wray on September 15, 1907, near Cardston in rural Alberta, Canada. Her parents moved to the United States when she was 3, first trying farming in Arizona, and eventually returning to Salt Lake City, where Wray's mother was from. Later, they settled in Los Angeles.

As a teenager she haunted studio casting offices and won an occasional bit role. Despite her mother's fears that the movie crowd was sinful, Miss Wray was allowed to accept a six-month contract with Hal Roach at $60 a week.

Wray had a daughter, Susan, from her first marriage and a daughter and son, Victoria and Robert Jr., by the second. Sixteen years after Riskin's death, she married his physician, Dr. Sandford Rothenberg.