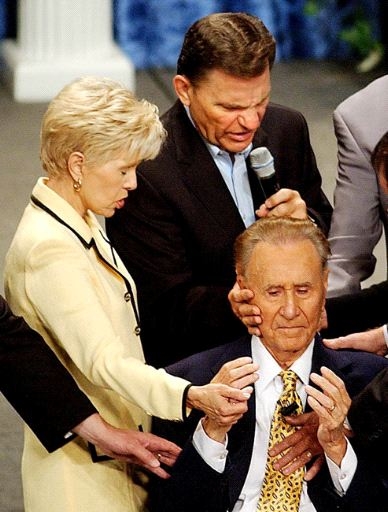 TULSA, Okla. – Oral Roberts, the evangelist who rose from humble tent revivals to found a multimillion-dollar ministry and a university bearing his name, died Tuesday. He was 91.

He gave up a local pastorate in Enid in 1947 to enter an evangelistic ministry in Tulsa to pray for the healing of the whole person — the body, mind and spirit. The philosophy led many to call him a "faith healer," a label he rejected with the comment: "God heals — I don't."

By the 1960s and '70s, he was reaching millions around the world through radio, television, publications and personal appearances. He remained on TV into the new century, co-hosting the program, "Miracles Now," with son Richard. He published dozens of books and conducted hundreds of crusades. A famous photograph showed him working at a desk with a sign on it reading, "Make no little plans here."

He credited his oratorical skills to his faith, saying, "I become anointed with God's word, and the spirit of the Lord builds up in me like a coiled spring. By the time I'm ready to go on, my mind is razor-sharp. I know exactly what I'm going to say and I'm feeling like a lion."

Unity of body, mind and spirit became the theme of Oral Roberts University. The campus is a Tulsa landmark, with its space-age buildings laden with gold paint, including a 200-foot prayer tower and a 60-foot bronze statue of praying hands.

His ministry hit upon rocky times in the 1980s. There was controversy over his City of Faith medical center, a $250 million investment that eventually folded, and Roberts' widely ridiculed proclamation that God would "call me home" if he failed to meet a fundraising goal of $8 million. A law school he founded also was shuttered.

Semiretired in recent years and living in California, he returned to Tulsa, Okla., in October 2007 as scandal roiled Oral Roberts University. His son, Richard Roberts, who succeeded him as ORU president, faced allegations of spending university money on shopping sprees and other luxuries at a time the institution was more than $50 million in debt.

Richard Roberts resigned as president in November 2007, marking the first time since Oral Roberts University was chartered in 1963 that a member of the Roberts family would not be at its helm. The rocky period for the evangelical school was eased by billionaire Oklahoma City businessman Mart Green donated $70 million and helped run the school in the interim, pledging to restore the public's trust. By the fall of 2009, things were looking up, with officials saying tens of millions of dollars worth of debt had been paid off and enrollment was up slightly.

That September, a frail-looking Oral Roberts attended the ceremony when the school's new president, Mark Rutland, was formally inaugurated.