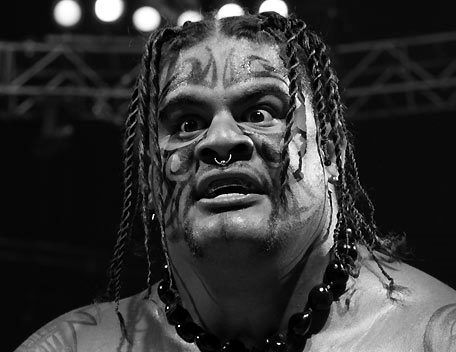 The former WWE intercontinental champion was killed by a heart attack, his family have confirmed.

He was found several hours later by his wife, not breathing and with blood coming out of his nose. He was immediately rushed to a local hospital.

There he was put on life support and his family told to come to Texas as quickly as possible.

Tributes have poured in from around the wrestling world for the man who headlined WrestleMania 23 in 2007 - the biggest selling PPV event in the history of the sport.

On that night he lost to Bobby Lashley, a result that meant billionaire reality TV star Donald Trump got to shave WWE boss Vince McMahon's head.

Lashley has posted a message on his Facebook saying: "Very sad day today. A good friend is gone."

WWE released a statement reading: "WWE would like to express its deepest condolences to Mr Fatu's family, friends and fans on his tragic passing.

"Mr Fatu was under contract with WWE at various time periods and most recently performed under the name Umaga. Mr Fatu's contract was terminated on June 11, 2009."

Former ECW owner and SunSport columnist Paul Heyman said: "The world is minus one very cool Samoan tonight. We offer our most profound condolences to the Fatu Family."

Fatu - trained by his famous uncles, the Wild Samoans Afa and Sika - first wrestled for WWE between 2002 and 2003 under the name of Jamal as part of the 3-Minute Warning tag team with his cousin Matt Anoa'i, aka Rosey.

After being released from his contract, reportedly as a result of getting into a bar fight, he had stints in rival groups TNA and All Japan before returning to the WWE in 2005.

During that time he won the IC title twice and enjoyed memorable feuds with Lashley, Jeff Hardy and John Cena, who he challenged for the company's world championship.

He was fired again by the WWE this June after violating their drug-testing policy for a second time and then refusing to go to rehab.

Umaga most recently competed on the Hulkamania tour of Australia, where he was said to be happy and healthy, amid rumours he was set to return to WWE.

Ken Anderson, better known as Mr Kennedy, was his opponent Down Under and Tweeted: "I'm very thankful to have had a private closed-door conversation with Ecki prior to our match a few days ago in Sydney.

"He insisted that we go out and tear the house down. We both had something to prove that night and in my opinion: Mission Accomplished!

"Our thoughts and prayers are with the entire Fatu family. Ecki absolutely adored his wife and was extremely proud of his children.

"I have so many amazing, funny, and heartwarming (sometimes gut wrenching belly-laughing) memories."

Fatu is the latest in a long line of wrestlers to pass away at a young age.

Others include Eddie Guerrero, 38, 'British Bulldog' Davey Boy Smith, 39, Andrew 'Test' Martin, 33, and Chris Benoit, 40, who in 2007 murdered his wife and seven-year-old son before committing suicide.