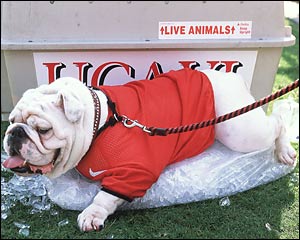 CNN) -- Uga VII, the University of Georgia mascot whose deeply furrowed face was a fixture at the school for more than a year, died early Thursday, the university said. He was 4 years old.

The purebred English bulldog died of heart-related causes in Savannah, Georgia, according to its owner, Frank "Sonny" Seiler.

Fans knew Uga VII had arrived when the white dog, sporting a spiked collar and red Georgia University jersey, made his short strides along the football field's sidelines. He made his first appearance at the August 30, 2008, season opener, when Georgia faced off against Georgia Southern, the university said. He was nearing the end of his second season with the team, the university said.

He was preceded by his father, Uga VI, the university's winningest mascot, who died of congestive heart failure.

"This is a very sad day for the Seiler family but also for all Georgia people," said Damon Evans, University of Georgia director of athletics in a university news release. "Just as his ancestors, he had captured the hearts of college football fans everywhere as the country's No. 1 mascot. He had been truly embraced by all those who follow the Georgia Bulldogs across the country. We will miss him dearly."

Uga VII's given name was Loran's Best, the university said. His death was unexpected.

"We are all in a state of shock," Seiler said in the release. "We had no warning whatsoever."

A wreath will be placed on Uga VII's doghouse on the sideline, the university said. There won't be a live mascot to take his place at Saturday's game against Kentucky.

Officials have not decided who will replace the white bulldog, but the decision is expected next year, Seiler said.

Until then, fans and Seiler will mourn the loss of the school's favorite pooch.

"He was 10-3 last year, which is not bad for a freshman," Seiler said. "Uga VII was not as active or mischievous as his father but more distinguished. He realized his role when he put his shirt on. He was well-behaved and always appreciated the significance of his role."