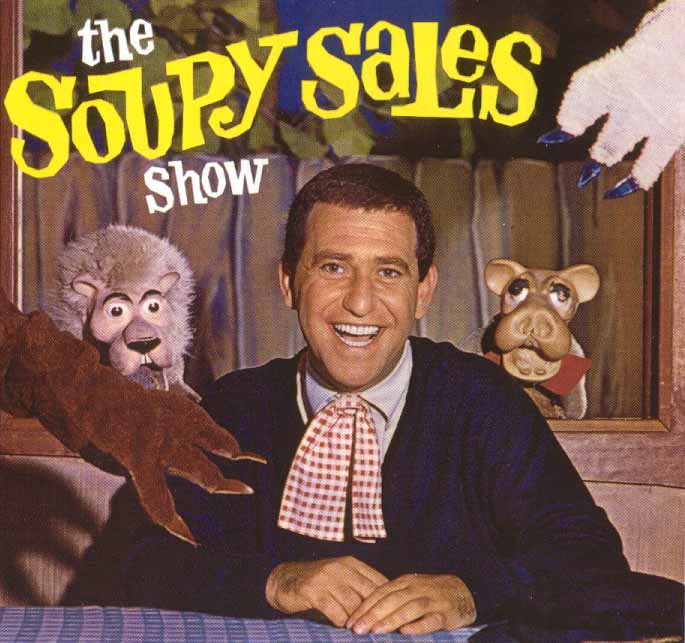 The comedian acquired a cult-like following among adults with a show ostensibly meant for children. His signature routine, which he elevated to an art form, was pie-throwing.

Soupy Sales, a comic with a gift for slapstick who attained cult-like popularity in the 1960s with a pie-throwing routine that became his signature, has died. He was 83.

Sales had numerous ailments and died Thursday at Calvary Hospital in the Bronx, said Kathy O'Connell, a longtime friend.

As the star of "The Soupy Sales Show," he performed live on television for 13 years in Detroit, Los Angeles and New York before the program went into syndication in the United States and abroad.

Ostensibly for children, the show had broad appeal among adults who found Sales' puns, gags and pratfalls deliciously corny and camp. His cast consisted of goofy puppets with names like White Fang, Black Tooth and Pookie, and a host of off-camera characters, including the infamous naked girl.

The high point of every show came when a sidekick launched a pie into Sales' face. Sales once estimated that he was hit by more than 25,000 pies in his lifetime.

The gag became more than hilarious; it evolved into a hip badge of honor. Frank Sinatra was first in a long line of celebrities who clamored for the privilege to be cream-faced, including Tony Curtis, Mickey Rooney, Sammy Davis Jr., Dick Martin and Burt Lancaster.

"I've never done a pretentious show; it's always had a live feeling, the kind of thing that comes across when you don't know what's going to happen next," Sales told author Gary Grossman in the 1981 book "Saturday Morning TV." "I've never done anything simply because I thought I could get away with it. I've just wanted to do the funniest show."

The possibility of humor dogged Sales from the start. He was born Milton Supman on Jan. 28, 1926, in the North Carolina backwater of Franklinton. The Supmans were the only Jews in town. Sales' father ran a dry goods store that sold sheets to the Ku Klux Klan.

The family name was often mispronounced as "Soupman." To make matters worse, his parents, who had nicknamed his brothers "Hambone" and "Chickenbone," dubbed him "Soupbone." Eventually, Milton became just Soupy.

His father died when he was 5, prompting a move to Huntington, W.Va. Sales acted in school plays and in high school was voted most popular boy.

World War II did not dampen his showbiz ambitions. He fought in the Pacific theater in the Navy and participated in the invasion of Okinawa but managed to entertain crew mates with routines broadcast on the ship's PA system.

After his discharge, Sales returned to West Virginia and enrolled in Marshall College as a journalism major, earning a bachelor's degree in 1949. He went to work for a radio station in Huntington as a scriptwriter. At night he did stand-up in nightclubs. Soon he became a disc jockey.

In the early 1950s he moved to Ohio, where a Cleveland station manager gave him the professional name of Soupy Hines. That was nixed in Detroit, where his new station manager thought Hines would be confused with an advertiser, the Heinz soup line. Thus was Soupy Sales born.

In 1953, Sales launched a daily live children's show on Detroit's WXYZ-TV, called "Soupy Sales Comics." The show caught on, causing the station to give him a nighttime slot for "Soupy's On." Sales created characters such as Wyatt Burp, a belch-prone sheriff, and Calypso King Harry Bella, a crazy-eyed South American with a mop top.

In 1955, the show was picked up by ABC as a summer replacement for "Kukla, Fran and Ollie" and renamed "The Soupy Sales Show." Its star soon became Detroit's top-rated daytime television personality.

Sales was joined by White Fang, "the meanest dog in the United States," and Black Tooth, "the nicest dog in the United States," of whom all that viewers saw were giant paws. Other characters included his irrepressible girlfriend, Peaches, the vivacious Marilyn Monwolf, and a bloodthirsty neighbor, the Count, who touted an album titled "Love in Vein."

Every show featured a segment called Words of Wisdom, an opportunity to offer silly sayings such as "Be true to your teeth and they won't be false to you."

The highlight of each show, of course, was the pie-throwing, which Sales elevated to an art.

Sales took his first pie in the face in 1950 when he played an Indian in a spoof of the James Stewart movie "Broken Arrow." That pie was real. Later, he would switch to shaving-cream pies. But he swore that the secret of a good pie was the crust: If it stuck to the face, it was, in Sales' opinion, no good.

"A pie has to hit you and explode into a thousand pieces," the expert explained, "so you see the person's face and see it take away his dignity."

By 1961, the face that launched several thousand pies in Detroit began to dominate local TV in Los Angeles. Critics were unkind, calling the show "a mishmash of mediocrity" that was meant for "kids with low IQs." But viewers lapped it up, making it the No. 1 local show by 1962. A survey at the time revealed that more than a third of Sales' fans consisted of adults. Some of them were hosting pie-lobbing parties in their basements.

One day, Sinatra called. "Hey, Soupy, it's Frank," he said. "I want to come on your show on one condition: I get hit with a pie." Sales was happy to fulfill the legendary crooner's wish.

The appearance by Sinatra stirred a stampede of stars hungry for the same humiliation. One night featured a triple-header: Sinatra, Sammy Davis Jr. and Trini Lopez were all pied together.

Once, the crew played a joke on him by posing a naked woman in a stage door. When Sales opened the door, he gasped and feared his career was over, but the scene was never telecast.

For notoriety, nothing beat the show that aired New Year's Day 1965, when Sales was producing the program in New York. Told he had a minute to fill, the comic told the children watching on WNEW-TV to find their parents' wallets and "get all the green pieces of paper with the pictures of guys in beards" and mail them to him. In return, he said, he would send them "a postcard from Puerto Rico."

Sales had used the same joke in Detroit and Los Angeles. But this time, the prank elicited some $80,000 "in Monopoly money," as well as a complaint from a viewer filed with the FCC. Sales' show was suspended, prompting fans to swamp the station's switchboard with protest calls, mostly from high school and college students who demanded that their favorite television fare resume. Within a week, it did.

On a website devoted to the Sales show, a fan recalled that the first program after the New Year's episode opened with stock footage of dancing girls kicking up their heels and crowds cheering; the musical accompaniment was "Happy Days Are Here Again." "It was obvious to all of us that our beloved Soupy was unrepentant," the fan wrote, "and we repressed youths were behind him. I must dispute the thesis . . . that Froggy from 'Andy's Gang' was the cause of '60s rebelliousness. It was Soupy who inspired my generation to anarchy."

Sales called the episode "the most brilliant minute of ad-lib in television history because it proved how powerful the medium is."

Later that year he invented a dance called "The Mouse," a loony version of the Twist in which Sales bared his upper teeth, raised his hands to his ears and wiggled his fingers while chewing in time to the music. He performed it several times on "The Ed Sullivan Show," where he met dancer Trudy Carson. They were married in 1980.

When animation took over children's programming in the 1960s, personalities such as Shari Lewis and Sales began to lose their appeal. In 1966 his show was not renewed in New York and went into syndication. A new version was produced and syndicated in 1978-79.

During the next few decades, Sales starred in a short-lived Broadway comedy and became a regular panelist on the long-running TV game show "What's My Line?" He also was a featured performer in the musical variety show "Sha Na Na" from 1978 to 1981.

In the mid-1980s, he emceed a radio show on WNBC in New York, sandwiched between Don Imus and Howard Stern. He acted in several movies, notably in the role of Moses in the 1993 cult comedy " . . . And God Spoke."

He once acknowledged that his trademark pie routine hurt his career: "Producers say, 'Hey, all he does is throw pies.' It kept me off a lot of shows."

His authority in pie-tossing even landed him in court -- as an expert witness. In 1974 he was called to testify in the court-martial of a sailor accused of pitching a pie into an officer's face. Noted defense attorney William Smith enlisted Sales to tell how, after launching more than 19,000 creamy missiles, he had never been prosecuted for assault with a pie. Pie-hurling, Sales told the court, was "a harmless joke" designed to "relieve tensions and frustrations." He offered to perform at the Port Hueneme naval base Christmas show if the charges were dropped but was turned down. The sailor was found guilty.

Sales kept up club appearances through the 1990s, performing before audiences of baby boomers.

"A lot of people grew up watching me," he told The Times several years ago. "I'll probably be remembered for the pies, and that's all right. That's fine and dandy. I'm flattered."

He is survived by his wife of 29 years, Trudy Carson Sales; sons Tony and Hunt from a previous marriage; a brother; and four grandchildren.