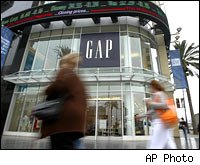 On Sunday, Donald Fisher, co-founder of the Gap (GPS), died at his home in San Francisco. He was 81.

In 1969, Fisher and his wife, Doris, opened the first Gap store on Ocean Avenue in San Francisco. They named their store, which originally sold jeans and music, for two things: the "gap" that they hoped to fill in the market, and the "generation gap" between the baby boomers and their parents. Within a few months, the Gap stopped selling music and began focusing solely on jeans.