William Safire, Nixon Speechwriter and Times Columnist, Is Dead at 79 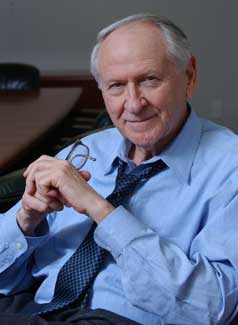 William Safire, a speechwriter for President Richard M. Nixon and a Pulitzer Prize-winning political columnist for The New York Times who also wrote novels, books on politics and a Malaprop’s treasury of articles on language, died at a hospice in Rockville, Md. on Sunday. He was 79.

The cause was pancreatic cancer, said Martin Tolchin, a friend of the family.

There may be many sides in a genteel debate, but in the Safire world of politics and journalism it was simpler: there was his own unambiguous wit and wisdom on one hand and, on the other, the blubber of fools he called “nattering nabobs of negativism” and “hopeless, hysterical hypochondriacs of history.”

He was a college dropout and proud of it, a public relations go-getter who set up the famous Nixon-Khrushchev “kitchen debate” in Moscow, and a White House wordsmith in the tumultuous era of war in Vietnam, Nixon’s visit to China and the gathering storm of the Watergate scandal that drove the president from office.

Then, from 1973 to 2005, Mr. Safire wrote his twice weekly “Essay” for the Op-Ed Page of The Times, a forceful conservative voice in the liberal chorus. Unlike most Washington columnists who offer judgments with Olympian detachment, Mr. Safire was a pugnacious contrarian who did much of his own reporting, called people liars in print and laced his opinions with outrageous wordplay.

Critics initially dismissed him as an apologist for the disgraced Nixon coterie. But he won the 1978 Pulitzer Prize for commentary, and for 32 years tenaciously attacked and defended foreign and domestic policies, and the foibles, of seven administrations. Along the way, he incurred enmity and admiration, and made a lot of powerful people squirm.

Mr. Safire also wrote four novels, including “Full Disclosure,” (Doubleday, 1977), a best-seller about succession issues after a president is blinded in an assassination attempt, and nonfiction that included “The New Language of Politics,” (Random House, 1968), and “Before the Fall,” (Doubleday, 1975,) a memoir of his White House years.

And from 1979 until earlier this month, he wrote “On Language,” a New York Times Magazine column that explored written and oral trends, plumbed the origins and meanings of words and phrases, and drew a devoted following, including a stable of correspondents he called his Lexicographic Irregulars.

The columns, many collected in books, made him an unofficial arbiter of usage, and one of the most widely read writers on language. It also tapped into the lighter side of the dour-looking Mr. Safire: a Pickwickian quibbler who gleefully pounced on gaffes, inexactitudes, neologisms, misnomers, solecisms and perversely peccant puns, like “The President’s populism and the First Lady’s momulism.”

There were columns on blogosphere blargon, tarnation-heck euphamisms, dastardly subjunctives and even Barack and Michelle Obama’s fist bumps. And there were Safire “rules for writers”: Remember to never split an infinitive. Take the bull by the hand and avoid mixing metaphors. Proofread carefully to see if you words out. Avoid cliches like the plague. And don’t overuse exclamation marks!!

Behind the fun, readers said, was a talented linguist who could not resist his addiction to alliterative allusions. There was a consensus too that his Op-Ed essays, mostly written in Washington and syndicated in hundreds of newspapers, were the work of a sophisticated analyst with voluminous contacts and insights into the way things worked in Washington.

Mr. Safire called himself a pundit — the word, with its implication of self-appointed expertise, might have been coined for him — and his politics “libertarian conservative,” which he defined as individual freedom and minimal government. He denounced the Bush administration’s U.S.A. Patriot Act as an intrusion on civil liberties, for example, but supported the war in Iraq.

He was hardly the image of a buttoned-down Times man: The shoes needed a shine, the gray hair a trim. Back in the days of suits, his jacket was rumpled, the shirt collar open, the tie askew. He was tall but bent — a man walking into the wind. He slouched and banged a keyboard, talked as fast as any newyawka and looked a bit gloomy, like a man with a toothache coming on.

His last Op-Ed column was “Never Retire.” He then became head of the Dana Foundation, which supports research in neuroscience, immunology and brain disorders. In 2005, he testified at a Senate hearing in favor of a law to shield reporters from prosecutors’ demands to disclose sources and other information. In 2006, he received the Presidential Medal of Freedom from Mr. Bush. From 1995 to 2004, he was a member of the board that awards the Pulitzer Prizes.

William Safir was born on Dec. 17, 1929, in New York City, the youngest of three sons of Oliver C. and Ida Panish Safir. (The “e” was added to clarify pronunciation.) He graduated from the Bronx High School of Science and attended Syracuse University, but quit after his second year in 1949 to take a job with Tex McCrary, a columnist for The New York Herald Tribune who hosted radio and television shows; the young legman interviewed Mae West and other celebrities.

In 1951, Mr. Safire was a correspondent for WNBC-TV in Europe and the Middle East, and jumped into politics in 1952 by organizing an Eisenhower-for-President rally at Madison Square Garden. He was in the Army from 1952 to 1954, and for a time was a reporter for the Armed Forces Network in Europe.

In 1959, working in public relations, he was in Moscow to promote an American products exhibit and managed to steer Vice President Nixon and Soviet Premier Nikita S. Khrushchev into the “kitchen debate” on capitalism versus communism. He took the photograph that became an icon of the encounter. Nixon was delighted, and hired Mr. Safire for his losing 1960 run for the presidency against John F. Kennedy.

In 1962, he married the former Helene Belmar Julius, a model, pianist and jewelry designer. The couple had two children, Mark and Annabel. They survive him, as does a granddaughter.

In 1968, he sold his agency, became a special assistant to President Nixon and joined a White House speechwriting team that included Patrick J. Buchanan and Raymond K. Price Jr. Mr. Safire wrote many of Nixon’s speeches on the economy and Vietnam, and in 1970 coined the “nattering nabobs” and “hysterical hypochondriacs” phrases for Vice President Spiro T. Agnew.

After Arthur Ochs Sulzberger, publisher of The Times, hired Mr. Safire, one critic said it was like setting a hawk loose among doves. As Watergate broke, Mr. Safire supported Nixon, but retreated somewhat after learning that he, like others in the White House, had been secretly taped.

Mr. Safire won his Pulitzer for columns that accused President Jimmy Carter’s budget director, Bert Lance, of shady financial dealings. Mr. Lance resigned, but was acquitted in a trial. He then befriended his accuser.

Years later, Mr. Safire called Hillary Clinton a “congenital liar” in print. Mrs. Clinton said she was offended only for her mother’s sake. But a White House aide said that Bill Clinton, “if he were not president, would have delivered a more forceful response on the bridge of Mr. Safire’s nose.”

Mr. Safire was delighted, especially with the proper use of the conditional.