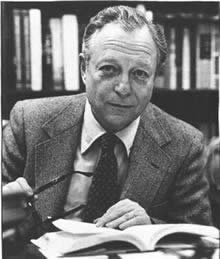 Irving Kristol, the political commentator who, as much as anyone, defined modern conservatism and helped revitalize the Republican Party in the late 1960s and early ’70s, setting the stage for the Reagan presidency and years of conservative dominance, died Friday in Arlington, Va. He was 89 and lived in Washington.

His son, William Kristol, the commentator and editor of the conservative magazine The Weekly Standard, said the cause of death was complications of lung cancer.

Mr. Kristol exerted an influence across generations, from William F. Buckley to the columnist David Brooks, through a variety of positions he held over a long career: executive vice president of Basic Books, contributor to The Wall Street Journal, professor of social thought at New York University, senior fellow at the American Enterprise Institute.

He was commonly known as the godfather of neoconservatism, even by those who were not entirely sure what the term meant. In probably his most widely quoted comment — his equivalent of Andy Warhol’s 15 minutes of fame — Mr. Kristol defined a neoconservative as a liberal who had been “mugged by reality.”

It was a description that summarized his experience in the 1960s, along with that of friends and associates like Daniel Bell, Nathan Glazer and Daniel Patrick Moynihan. New Deal Democrats all, they were social scientists who found themselves questioning many of President Lyndon B. Johnson’s Great Society ideas.

Mr. Kristol translated his concerns into a magazine. In 1965, with a $10,000 contribution from a wealthy acquaintance, he and Daniel Bell started The Public Interest. Its founding is generally considered the beginning of neoconservatism. “Something like a ‘movement’ took shape,” Mr. Kristol wrote, “with The Public Interest at (or near) the center.”

The Public Interest writers did not take issue with the ends of the Great Society so much as with the means, the “unintended consequences” of the Democrats’ good intentions. Welfare programs, they argued, were breeding a culture of dependency; affirmative action created social divisions and did damage to its supposed beneficiaries. They placed practicality ahead of ideals. “The legitimate question to ask about any program,” Mr. Kristol said, “is, ‘Will it work?’,” and the reforms of the 1960s and ’70s, he believed, were not working.

For more than six decades, beginning in 1942, when he and other recent graduates of City College founded Enquiry: A Journal of Independent Radical Thought, his life revolved around magazines. Besides The Public Interest, Mr. Kristol published, edited and wrote for journals of opinion like Commentary, Encounter, The New Leader, The Reporter and The National Interest.

All were “little magazines,” with limited circulations, but Mr. Kristol valued the quality of his readership more than the quantity. “With a circulation of a few hundred,” he once said, “you could change the world.”

Small circles and behind-the-scenes maneuverings suited him. He never sought celebrity; in fact, he was puzzled by writers who craved it. Described by the economics writer Jude Wanniski as the “hidden hand” of the conservative movement, he avoided television and other media spotlights; he was happier consulting with a congressman like Jack Kemp about the new notion of supply-side economics and then watching with satisfaction as Mr. Kemp converted President Ronald Reagan to the theory. Mr. Kristol was a man of ideas who believed in the power of ideas, an intellectual whose fiercest battles were waged against other intellectuals.

A major theme of The Public Interest under Mr. Kristol’s leadership was the limits of social policy; he and his colleagues were skeptical about the extent to which government programs could actually produce positive change.

Neoconservatism may have begun as a dispute among liberals about the nature of the welfare state, but under Mr. Kristol it became a more encompassing perspective, what he variously called a “persuasion,” an “impulse,” a “new synthesis.” Against what he saw as the “nihilistic” onslaught of the ’60s counterculture, Mr. Kristol, in the name of neoconservatism, mounted an ever more muscular defense of capitalism, bourgeois values and the aspirations of the common man that took him increasingly to the right.

For him, neoconservatism, with its emphasis on values and ideas, had become no longer a corrective to liberal overreaching but an “integral part” of conservatism and the Republican Party, a challenge to liberalism itself, which, in his revised view, was a destructive philosophy that had lost touch with ordinary people.

Neoconservatism maintained a lingering sympathy for certain aspects of Roosevelt’s New Deal, but its focus had shifted to the culture wars and to upholding traditional standards. Liberalism led to “moral anarchy,” Mr. Kristol said, arguing the point with one of his wisecracking encapsulizations: “In the United States today, the law insists that an 18-year-old girl has the right to public fornication in a pornographic movie — but only if she is paid the minimum wage.”

Mr. Kristol’s rightward drift, though it brought him new allies like Buckley and Robert Bartley, the head of The Wall Street Journal’s editorial board, broke up the original Public Interest family. Mr. Moynihan went on to a celebrated career as a Democratic senator from New York, and Mr. Bell gave up the coeditorship of the magazine in the early ’70s, declaring himself a socialist in economics, a liberal in politics and a conservative in culture. (He was replaced by Nathan Glazer.)