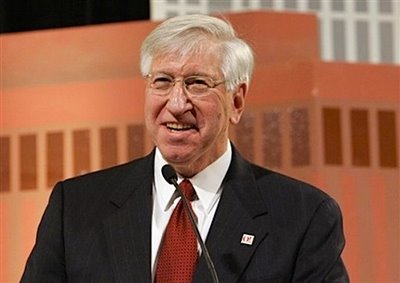 From the moment he made the move nine years ago this month, Myles Brand was destined to be remembered as the man who fired mercurial Hall of Fame basketball coach Bob Knight.

But the former philosophy professor and Indiana University president went on to leave a far deeper imprint on college athletics, most notably overseeing a series of bold academic reforms as president of the NCAA. Under him, power of the more than 1,000-school association passed from athletics officials to university CEOs.

Brand died Wednesday afternoon at age 67, ending a nine-month battle with pancreatic cancer and an NCAA tenure that began in January 2003. "His focus on academic achievement propelled student-athletes to get an education where they otherwise might not have. That is his legacy," said former Tulsa President Robert Lawless, who headed the committee that selected him.

Brand had continued in his job after the disease was diagnosed in January, cutting back on public appearances but maintaining a presence in the NCAA's Indianapolis offices until recent weeks. He passed away at his home, surrounded by family, the association said.

The NCAA's top-level Executive Committee, headed by University of Georgia President Michael Adams, will select his successor. The panel isn't scheduled to meet until Oct. 29, but "it's safe to assume they will be in contact in one form or another as soon as they determine it's appropriate," NCAA senior vice president Greg Shaheen said.

Shaheen, who directs most of the NCAA's media and marketing activities and runs the men's basketball tournament, is one of four executives who moved into more prominent day-to-day roles in the association after the seriousness of Brand's illness was determined in January. The others are Executive Vice President Bernard Franklin, a former Virginia Union University president who works closely with the NCAA's various governance boards, Senior Vice President and chief financial officer Jim Isch and Wally Renfro, Brand's longtime senior advisor.

Speculation on a potential successor falls on Adams and includes a number of university presidents and chancellors: Graham Spanier of Penn State, Mary Sue Coleman of Michigan and Walt Harrison of Hartford, who has been instrumental in drawing up the series of academic measures. Franklin also has been mentioned.

"I don't think he can be replaced," Lawless said of Brand. "I just hope the NCAA can find someone who can carry on the job that Myles began."

Unlike Roger Goodell, David Stern, Bud Selig and other commissioners of professional leagues, the NCAA president has no vote in policymaking. That's done by the Executive Committee and governance boards that oversees the association's three divisions. The president identifies issues, offers direction and works to build consensus.

Brand proved effective at that.

The first university CEO to go on to lead the more than 1,000-school association, he will be remembered primarily for a series of reforms that shored up the academic image of college athletics. They toughened guidelines for athletes and held schools more accountable through publicly released Academic Progress Rates (APRs), handing unprecedented penalties — including postseason bans — to low-rated teams.

"He made tremendous progress in moving the NCAA closer to its educational roots and transformed it into an organization concerned about the student component of the student-athlete," Big Ten commissioner Jim Delany said.

Brand also was lauded for getting school presidents more engaged in NCAA matters and making the organization more athlete-friendly, more frequently giving them the benefit of doubt in eligibility cases. "He really changed the heart of the NCAA," said Jim Haney, executive director of the National Association of Basketball Coaches. "Under his leadership, the NCAA became a much more compassionate organization? willing to work with institutions, coaches and student-athletes."

Brand was less successful in getting schools to reign in their spending on coaches' salaries, facilities and other areas in athletics. A move he championed to bar schools from using Native American nicknames, mascots and logos proved controversial, though offending institutions ultimately complied.

A native of Brooklyn, N.Y., who ran Indiana's eight-campus system for eight years and Oregon's for five years before that, Brand first drew national attention by firing the iconic Bob Knight in September 2000 for a "pattern of unacceptable behavior" and violating a zero-tolerance policy imposed four months earlier. That, and his campus CEO's resume, gave Brand cache with school presidents and chancellors after he was picked to head the NCAA in October 2002. He took over three months later.

"He really didn't have any vote so he achieved what he did through influence and persuasion," said former Tulsa President Robert Lawless, who headed the committee that selected Brand. "As a university president, myself, I held high expectations for him and he exceeded all of them."

Still, he was linked most closely to the firing of Knight. Kenneth Gros Louis, Indiana's chancellor at the time, said Brand was surprised by the "viciousness" of the response to Knight's firing. Students protested and hung Brand in effigy.

"One could say he misread the fans of Bobby Knight," Gros Louis said. "I think that was one reason he left (for the NCAA in 2002), in the middle of an academic year. That was still lingering."

There was no immediate reaction to Brand's passing from Knight, who went on to coach almost seven seasons at Texas Tech before retiring in February 2008. He was out of town Wednesday, Tech spokesman Randy Farley said, and is expected to be out the rest of the month.

Services for Brand are pending, the NCAA said.

He is survived by his wife, Peg, and a son, Joshua.