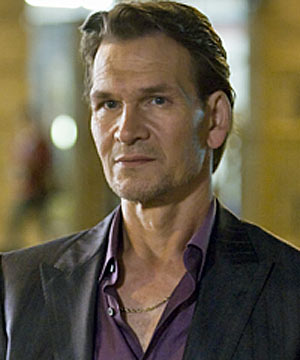 Star of the blockbuster films 'Dirty Dancing' and 'Ghost', the actor and dancer had been diagnosed with pancreatic cancer last year. He struggled against being typecast as a leading man.

Patrick Swayze, the actor and classically trained dancer whose role in the enduringly popular "Dirty Dancing" made him a movie star, one who struggled with the alienation of fame and against being typecast as a leading man, died Monday. He was 57.

Swayze, who also starred in the blockbuster film " Ghost," died with his family at his side, his publicist, Annett Wolf, told the Associated Press.

Early last year, Swayze learned he had pancreatic cancer, a diagnosis that came two weeks after production wrapped on the pilot of "The Beast," an A&E series in which Swayze starred as an unorthodox FBI agent.

Although the cancer was advanced, he was found to have a more controlled form of the disease and persuaded the network to go ahead with the series. It was shot over five months in Chicago while Swayze was undergoing chemotherapy and taking an experimental drug that targets tumors.

"I'm proud of what I'm doing," Swayze told the New York Times in October. "How do you nurture a positive attitude when all the statistics say you're a dead man? You go to work."

Days before the series debuted in January, Swayze was admitted to a hospital with pneumonia, a turn that cast a pall over the launch of the show. He was released after a week and went home to rest.

His fame intruded on his final months as he wrestled with what he called the "reckless reporting" that regularly pronounced he was near death. Such coverage amounted to "emotional cruelty," he said, "when hope is so precious."

When "Dirty Dancing" was released in 1987, it was a sleeper hit that soared in large part because of Swayze's considerable charisma and dancing skills. Critics praised the ruffian nobility he brought to the character of Johnny Castle, a sexy-yet-sensitive dance instructor from the wrong side of the tracks.

They also noted the red-hot chemistry between Swayze and his teen pupil, nicknamed Baby, played by Jennifer Grey. Their exuberant performances were considered career-making.

To Swayze, the musical love story set at a Catskills resort worked because people relived "those wonderfully painful moments . . . when you just need to love somebody with all your heart, and to be loved back. . . . Plus, it was a pretty sexy movie," he told The Times in 1997.

In "Dirty Dancing's" climactic scene, Swayze delivers a line with swaggering perfection. "Nobody puts Baby in a corner," he says as he defies her father and pulls her up for a final uplifting dance sequence. Fans said that scene secured the movie's place in the pantheon of best date movies of all time.

He turned down a reported $7 million to star in a "Dirty Dancing" sequel and resisted roles that would cast him as a hunk with a heart.

"I look for curveballs in my life," Swayze told the Chicago Tribune in 1989.

After appearing as a roughneck cop in "Next of Kin" and as a steely bouncer in "Road House" -- two 1989 movies that flopped -- he fought for a leading role in the romantic tear-jerker "Ghost." Swayze told an interviewer that he thought the part would help him be seen as an actor, rather than the "dance dude" or "action guy."

In the film, Swayze is an investment banker who returns as a ghost to solve his murder and more fully express his love for his girlfriend, played by Demi Moore. Whoopi Goldberg, in an Oscar-winning role, is the reluctant medium who conveys his messages. The film struck a seductive chord with audiences and was a runaway hit.

"Ghost" confirmed Swayze's heartthrob status -- former Times movie critic Sheila Benson wondered in her 1990 review whether certain scenes had been earmarked "Swayze Shirt Opportunity" because he went without one so much. But the movie conferred legitimacy on Swayze as an actor.

The film seemed to assure a career for him as a leading man, but he went in other directions.

He starred with Keanu Reeves in the action-packed "Point Break" (1991) so he could become a licensed sky diver and surf big waves. In the noble "City of Joy" (1992), Swayze was an idealistic American surgeon in Calcutta; critics said he was miscast but acquitted himself well. In "To Wong Foo, Thanks for Everything, Julie Newmar" (1995), he played a drag queen.

Defending his choices, Swayze said he was "fed up with that Hollywood blockbuster mentality."

Cult movies "have given me a career for 30 years. It wouldn't have been worth it if I had been stuck as the leading man or the dance guy," he said, according to a story last year in the London Daily Express.

"The loneliness of fame" was a theme to which he often returned, cautioning in Playboy in 1992: Fame can make "you feel you've somehow pulled off an enormous hoax and that your whole life is a lie. All the hype wound up making me cynical, and I turned into a not-very-pretty drunk."

He credited his wife, Lisa Niemi, a dancer he met back home in Texas and married in 1976, for pulling him back from a drinking problem that he said started after the death of his father in 1982 and seemed to keep pace with his growing fame.

Swarmed by a crowd at a 1989 film premiere, Swayze destroyed his hotel room and realized he needed to quit drinking, he told People in 1990. He said he quit the next day.

But his drinking problem recurred, and he struggled with depression after his older sister Vicki committed suicide in 1994 and several friends died. An ultimatum from his wife sent him into rehab, he said in 2006 in the Sunday Times of London.

"I have a wild-man edge," Swayze once said. "If my life looks good, I sabotage it."

He escaped from fame to the five-acre ranch the couple named Rancho Bizarro in the foothills of the San Gabriel Mountains. They raised Arabian horses and peacocks.

He was born Aug. 18, 1952, in Houston, the second of five children of Jesse and Patsy Swayze. His mother was a dance teacher and professional ballet choreographer who would choreograph the 1980 film "Urban Cowboy." His father was an engineering draftsman whom Swayze called a "gentle cowboy."

His mother taught Swayze to dance at an early age, and he was unmercifully bullied because of it. "I had to fight my way up from the days I was little," Swayze said in the Sunday Times story.

After two years at San Jacinto College in Houston, Swayze dropped out to play Prince Charming in a touring "Disney on Parade" ice show.

In 1972, he moved to New York, intent on a career in ballet. His future wife, Niemi, whom he met at his mother's dance studio, was five years his junior. She followed after graduating from high school in 1975.

Both landed jobs with the Joffrey Ballet's second company.

Swayze joined the Eliot Feld Ballet Company in 1976, but after a year as a principal dancer, a knee injury from his high school football days flared up, ending his dance career.

He turned exclusively to acting and was cast in the lead of "Grease" on Broadway, a role that had previously helped make stars of John Travolta and Barry Bostwick.The year he moved to Los Angeles, Swayze appeared in his first film -- 1979's "Skatetown, U.S.A.," as the leader of a roller-skating and dancing gang. The movie has been called "amiably trashy," but his performance received an enthusiastic review from The Times' Kevin Thomas:

"Not since Valentino did his tango in 'The Four Horsemen of the Apocalypse' has there been such a confident display of male sexuality as when a lithe newcomer to films named Patrick Swayze hits the rink."

On television, he received attention for playing a leukemia victim on television's "MASH" in 1981. He said the role gave him hope that he could do quality work.

In 1983, he appeared with Matt Dillon and other fledgling stars in Francis Ford Coppola's "The Outsiders," which boosted Swayze's career.

He starred in the first film widely distributed with a PG-13 rating, 1984's "Red Dawn." The violent Cold War film was largely dismissed as implausible by reviewers, but Swayze's performance as a young man who quickly becomes a leader of a group of rebels was praised for convincingly communicating his emotional torment. Grey, with whom he would re-team in "Dirty Dancing," was also in the cast.

He considered his first big break to be a starring role as Confederate soldier Orry Main in ABC's 1985 Civil War miniseries "North and South."

With his wife, Swayze co-starred in the futuristic "Steel Dawn," which was released in 1987 after "Dirty Dancing" but was not well-received.

Occasionally, he composed for movies, including writing and singing "She's Like the Wind" in "Dirty Dancing" and performing background music in "Road House."

Throughout the 1990s, he sporadically appeared in films but remained largely out of the limelight. Thrown from a horse in 1997, he shattered his legs and left shoulder; it took 12 operations to rebuild them.

Swayze believed in various forms of spiritualism and was always quick to say that he reveled in his marriage. The couple had no children.

In 2003, he fulfilled a long-held dream of making a dance movie with his wife, called "One Last Dance," based on her semi-autobiographical play about two aging ballerinas.

Swayze called it his "swan song . . . the last time I could pull that kind of dancing off."

When asked in 2004 what he did in his spare time, he told The Times that he didn't have any -- being a rancher, wildlife conservationist and actor-director-producer kept him busy.