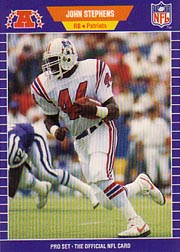 SHREVEPORT, La. (AP) — John M. Stephens, the 1988 Offensive Rookie of the Year for the New England Patriots, has been killed after his pickup truck ran off a highway and struck some trees, authorities said Wednesday.

Stephens, 43, apparently lost control of his vehicle on a rural stretch of Louisiana Highway 169 near Shreveport on Tuesday evening, the Caddo Parish Sheriff's office said.

Stephens wasn't wearing a seatbelt and was thrown after the truck hit some trees head-on, sheriff's spokeswoman Cindy Chadwick said in a statement.

The statement said Stephens apparently was traveling at a high rate of speed at the time of the single-vehicle accident.

"It appeared Stephens lost control and tried to overcorrect his steering, causing him to cross back over the road and hit the trees," the sheriff's office added.

No one else was injured in the crash.

"This is a very sad loss," said Adrian Howard, a defensive back who played with Stephens at Northwestern State from 1986 until 1989.

Stephens, selected 17th in the 1988 NFL Draft, played six NFL seasons, reaching the Pro-Bowl as a rookie when he ran for 1,168 yards. He played for the Patriots until 1992, then spent time with Green Bay, Atlanta and Kansas City before retiring with 3,440 career yards and 18 touchdowns.

At Northwestern State, Stephens broke the school's career rushing record previously set by Joe Delaney, topping it by 10 yards with 3,057.

Delaney was the 1981 AFC Offensive Rookie of the Year for the Kansas City Chiefs and when Stephens won his award seven years later, it made Northwestern State the only school to produce two running backs who went on to be Rookie of the Year winners.