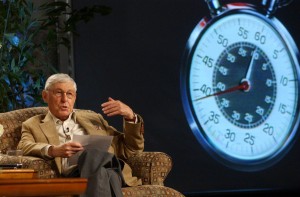 NEW YORK – Don Hewitt, the CBS Newsman who invented "60 Minutes" and produced the popular newsmagazine for 36 years, has died. He was 86.

He died of pancreatic cancer Wednesday at his home in Bridgehampton, N.Y., said CBS.

Hewitt joined CBS News in television's infancy in 1948, and produced the first televised presidential debate between John F. Kennedy and Richard Nixon in 1960.

He made his mark in the late 1960s when CBS agreed to try his idea of a one-hour broadcast that mixed hard news and feature stories. The television newsmagazine was born on Sept. 24, 1968, when the "60 Minutes" stopwatch began ticking.

He dreamed of a television version of Life, the dominant magazine of the mid-20th century, where interviews with entertainers could coexist with investigations that exposed corporate malfeasance.

"The formula is simple," he wrote in a memoir in 2001, "and it's reduced to four words every kid in the world knows: Tell me a story. It's that easy."