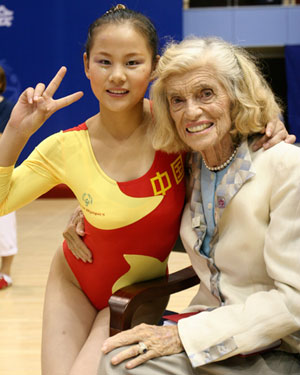 HYANNIS, Mass. (AP) -- President John F. Kennedy's sister Eunice Kennedy Shriver, who carried on the family's public service tradition by founding the Special Olympics and championing the rights of the mentally disabled, died Tuesday morning, her family said in a statement. She was 88.

Shriver had suffered a series of strokes in recent years and died at 2 a.m. at Cape Cod Hospital in Hyannis. The hospital is near the Kennedy family compound, where her sole surviving brother, Sen. Edward Kennedy, has been battling a brain tumor.

As celebrity, social worker and activist, Shriver was credited with transforming America's view of the mentally disabled from institutionalized patients to friends, neighbors and athletes. Her efforts were inspired in part by the struggles of her mentally disabled sister, Rosemary.

Peter Collier, author of "The Kennedys, an American Drama," called Eunice Shriver the "moral force" of the Kennedy family.

"We have always been honored to share our mother with people of good will the world over who believe, as she did, that there is no limit to the human spirit," her family members said in the statement.

A 1960 Chicago Tribune profile of the women in then-candidate JFK's family said Shriver was "generally credited with being the most intellectual and politically minded of all the Kennedy women."

When her brother was in the White House, she pressed for efforts to help troubled young people and the mentally disabled. And in 1968, she started what would become the world's largest athletic competition for mentally disabled children and adults. Now, more than 1 million athletes in more than 160 countries participate in Special Olympics meets each year.

"When the full judgment on the Kennedy legacy is made - including JFK's Peace Corps and Alliance for Progress, Robert Kennedy's passion for civil rights and Ted Kennedy's efforts on health care, work place reform and refugees - the changes wrought by Eunice Shriver may well be seen as the most consequential," Harrison Rainie, author of "Growing Up Kennedy," wrote in U.S. News & World Report in 1993.

It was Shriver who revealed the condition of her sister Rosemary to the nation during her brother's presidency.

"Early in life Rosemary was different," she wrote in a 1962 article for the Saturday Evening Post. "She was slower to crawl, slower to walk and speak. ... Rosemary was mentally retarded." Rosemary Kennedy underwent a lobotomy when she was 23, though that wasn't mentioned in the article. She lived most of her life in an institution in Wisconsin and died in 2005 at age 86.

The roots of the Special Olympics go back to a summer camp Shriver ran in Maryland in 1963. Shriver would "get right in the pool with the kids; she'd toss the ball," said a niece, former Maryland Lt. Gov. Kathleen Kennedy Townsend, who volunteered at the camp as a teen. "It's that hands-on, gritty approach that awakened her to the kids' needs."

Realizing the children were far more capable of sports than experts said, Shriver organized the first Special Olympics in 1968 in Chicago. The two-day event drew more than 1,000 participants from 26 states and Canada.

By 2003, the Special Olympics World Summer Games, held that year in Dublin, Ireland, involved more than 6,500 athletes from 150 countries. The games are held every four years.

Well into her 70s, Shriver remained a daily presence at the Special Olympics headquarters in Washington.

Juvenile delinquency was another issue that interested Shriver and spurred her to action. In his 1991 book "The Promised Land: The Great Black Migration and How It Changed America," author Nicholas Lemann said the Kennedy administration's juvenile delinquency commission, "a pet project that had been created to placate Eunice," became the precursor of the vast federal effort to improve the lot of urban blacks.

After he took office, President Lyndon B. Johnson tapped R. Sargent Shriver to lead his War on Poverty.

Eunice Shriver was the recipient of numerous honors, including the nation's highest civilian award, the Presidential Medal of Freedom, which she received in 1984. In May, the National Portrait Gallery installed a painting of her - the first portrait commissioned by the museum of someone who had not been a president or first lady.

Shriver was born in Brookline, Mass., the fifth of nine children to Joseph P. Kennedy and Rose Fitzgerald Kennedy. She earned a sociology degree from Stanford University in 1943 after graduating from a British boarding school while her father served as ambassador to England.

She was a social worker at a women's prison in Alderson, W.Va., and worked with the juvenile court in Chicago in the 1950s before taking over the Joseph P. Kennedy Foundation with the goal of improving the treatment of the mentally disabled. The foundation was named for her oldest brother, Joseph Jr., who was killed in World War II.

In 1953, she married Shriver. He became JFK's first director of the Peace Corps, was George McGovern's vice-presidential running mate in 1972, and ran for president himself briefly in 1976.

Survivors include her husband, who was diagnosed with Alzheimer's disease in 2003, and the couple's five children: former NBC newswoman Maria Shriver, who is married to Schwarzenegger; Robert, a city councilman in Santa Monica, Calif.; Timothy, chairman of Special Olympics; Mark, an executive at the charity Save the Children; and Anthony, founder and chairman of Best Buddies International, a volunteer organization for the mentally disabled.

Mark Shriver once said his parents' actions, not just words, influenced their children.

"In the course of our upbringing, they stressed the importance of giving back," he said. "But we didn't sit around having family discussions about it. We learned by what she and my father were doing."