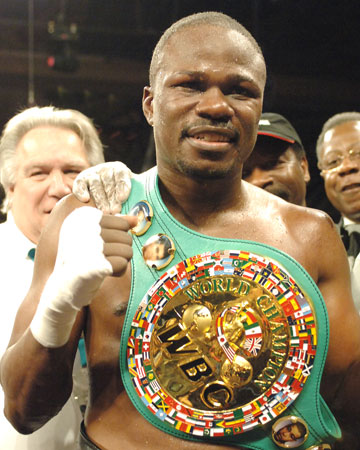 Fulton County medical examiner Michele Stauffenberg confirmed the case was a homicide and that the autopsy showed Forrest died from "multiple gunshot wounds involving the torso and thigh." Sgt. Lisa Keyes said a police report on the shooting was not immediately available.

WSB Radio in Atlanta first reported the shooting, citing a police spokesman. Forrest, who was 38, lived in Atlanta and was an Augusta, Ga., native.

Lt. Keith Meadows told the radio station that Forrest was shot seven or eight times -- at least once in the head -- as he chased at least two men who had tried to steal his Jaguar as he put air in its tires at an Atlanta gas station. Forrest had a gun and confronted the men, who fatally wounded him with two semi-automatic weapons, according to police.

"At this point we have a general description of at least two black males driving a red Monte Carlo," Meadows said, according to the report.

Keyes said that there are no official suspects at this time.

Promoter Gary Shaw, who had two stints as Forrest's promoter, said, "It's 100 percent confirmed. He's dead. I will say this about him -- he was a decent human being. His work with kids, I think people knew how much he cared for kids, underprivileged and mentally challenged people. He was a real decent human being outside the ropes."

Police said the suspects likely didn't know Forrest, whose girlfriend's young son was in the car when he was shot.

"What can you say? Alexis Arguello, Arturo Gatti and Vernon Forrest all leaving us within 30 days? I think it's a little much for our sport to handle," Shaw said, referring to the recent high-profile deaths of two other boxing stars. "The violence, the guns have to go. Violence belongs inside the ropes. Not outside them. It's just senseless. Maybe boxing ought to dedicate itself to keeping the violence inside the ropes and try to send that message out to the world."

Gatti, a former two-time champion who retired in 2007, was found dead July 11 at a Brazilian resort. Gatti's wife, Amanda Rodrigues, is being held as the prime suspect.

Arguello, another former champion, was found dead on July 1 at his home in Managua, Nicaragua, in an apparent suicide. He was elected mayor of Nicaragua's capital last year.

"I just feel so bad, he has a son you know," McGirt said. "Someone is going to be raised without a father because somebody wanted to rob someone."

Manager Al Haymon was too broken up to talk about Forrest, the first fighter he signed to what would become an all-star stable.

"He was one of the most gracious and charitable fighters in boxing and he will be missed by the entire boxing community and all of his friends at HBO," HBO Sports president Ross Greenburg told The Associated Press.

Greenburg helped in the production of eight of Forrest's fights.

"Maybe Vernon's lasting legacy will be for Americans everywhere to rise up and end this kind of senseless violence," Greenburg said.

Forrest (41-3, 29 KOs), a 1992 U.S. Olympian, was a former two-time welterweight and two-time junior middleweight champion best known for his two decision victories against Shane Mosley in 2002.

Forrest had beaten Mosley to keep him off the 1992 Olympic team but when they met in January 2002 in New York, it was Mosley, then widely regarded as the pound-for-pound No. 1 fighter in boxing, who was a significant favorite.

Instead, Forrest knocked Mosley down and dominated the fight to hand him his first pro loss and win the WBC welterweight title. Forrest outpointed him in a closer fight in the July 2002 rematch in Indianapolis.

Forrest won the vacant IBF welterweight title in May 2001 with a lopsided decision against Raul Frank in New York. It was a rematch because their first bout ended in a three-round no contest nine months earlier. Forrest never defended that belt, instead vacating in order to facilitate the big-money first fight with Mosley.

Forrest was also known for his charitable side because of his involvement in Destiny's Child, a group home that provides support and guidance for mentally challenged adults. Forrest had often talked about how the struggles of people he helped support provided him with inspiration when he fought.

"It was truly his calling," Forrest's publicist, Kelly Swanson, said of his work with children. "When he wasn't boxing, this was his full-time job.

He was ready to come back and we were discussing fights for Vernon. ... I thought he still had a career in front of him.
” -- Promoter Gary Shaw

After signing a multimillion dollar contract with HBO after the wins against Mosley, Forrest was stunningly upset in the first fight of the new deal when Ricardo Mayorga knocked him out in the third round in January 2003 in Temecula, Calif. In the rematch that July in Las Vegas, Mayorga won a majority decision to retain the title.

Forrest entered the rematch with Mayorga with nagging shoulder and elbow injuries, which required surgery and forced him into a two-year layoff after the bout.

Forrest returned in July 2005 and knocked out Elco Garcia; he was still troubled by his left arm, but continued to fight. After another one-year layoff, Forrest won a controversial decision against former welterweight titlist Ike Quartey in August 2006 before another 11-month layoff.

After knocking out Michele Piccirillo in the 11th round of his first defense in December 2007, Forrest was upset by former "Contender" reality series winner Sergio Mora via majority decision in June 2008.

But Forrest reclaimed the title Sept. 13 in Las Vegas by dominating Mora in the rematch in what turned out to be Forrest's final fight.

Ken Hershman, vice president in charge of boxing at Showtime, which aired Forrest's first fight with Mora, said Forrest was a popular fighter who was dedicated to his charity work.

"He wasn't looking for anything, he just did it because it was the right thing to do," Hershman said.

"Vernon was a young, vibrant guy coming to the end of his career. He still had a lot of life ahead of him."

Forrest had been scheduled to defend against mandatory challenger Sergio Martinez on Aug. 1, but suffered a rib injury training for an April tune-up fight with Jason LeHoullier and withdrew from both matches.

With the mandatory defense long overdue against Martinez, Forrest was stripped of his title. But, according to Shaw, he was not quite finished.

"He was ready to come back and we were discussing fights for Vernon," said Shaw, who first promoted Forrest when the two were with Main Events in the early part of the decade. "I had told Al Haymon recently I would love to make a fight between Vernon and [middleweight champion] Kelly Pavlik. I thought he still had a career in front of him."

Dan Rafael is a senior boxing writer for ESPN.com. Information from The Associated Press was used in this report.