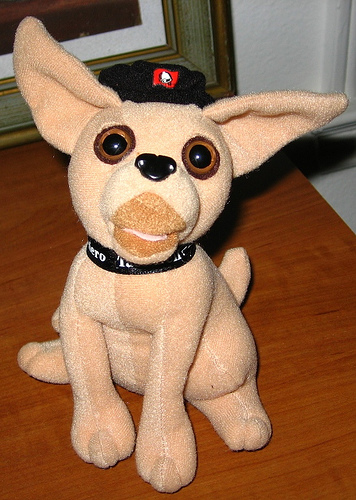 Gidget, known for the tagline ‘Yo quiero Taco Bell,’ died from a stroke

She charmed millions without ever saying a word — and managed to make fast-food tacos adorable. Gidget, the Chihuahua best known for her Taco Bell ad campaign (and her famous overdubbed tagline, "Yo quiero Taco Bell"), died from a stroke on Tuesday night at age 15.

"She made so many people happy," says Gidget's trainer, Sue Chipperton. PEOPLE met both Gidget and Sue at a Hollywood animals photo shoot in February, where the pup was a consummate pro and delighted the crew with her playful nature.

"When she's on a set, she comes alive," Chipperton said at the time. But when the mostly retired canine actor wasn't joining her trainer on shoots, the 15-year-old was happy to just kick back. "She goes on hikes with me and she loves the sun," said Chipperton, who added that Gidget was happy to sleep "for 23 hours and 45 minutes a day. She'll lay outside when it's 105 degrees! I like to joke that it's like looking after a plant."

In addition to her gig as spokesdog for Taco Bell, Gidget appeared in a commercial for the '90s edition of Trivial Pursuit and played Bruiser's mom in Legally Blonde 2 (Moonie, the dog who played Bruiser, was her best friend and sometime roommate at Chipperton's house).

Other than a few other small cameos, Gidget's working life didn't continue much beyond her Taco Bell legacy. But she left quite an impression. "One time, I kid you not, she actually pushed her stand-in out of the way because he was still there when she arrived on set," Chipperton recalled with a laugh. "Gidget always knew where the camera was."