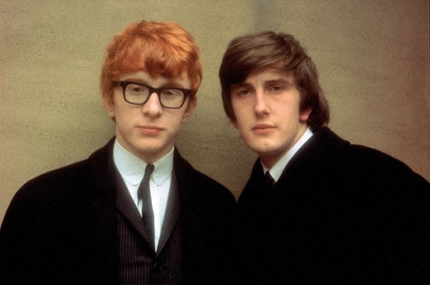 HARTFORD, Conn. -- Gordon Waller of the pop duo Peter and Gordon, who were part of the 1960s British Invasion and had a string of hits including several written by their friend Paul McCartney, has died. He was 64.

Waller and Peter Asher hit No. 1 on music charts around the world in 1964 with their debut single ''A World Without Love.'' McCartney, who at the time was dating Asher's sister, actress Jane Asher, wrote the song.

The duo also hit the charts with other songs written by McCartney, including ''Nobody I Know'' and ''I Don't Want To See You Again.'' Although McCartney wrote the songs, they were jointly credited to him and John Lennon, as was all their work at the time.

''Woman,'' another McCartney song not to be confused with Lennon's later song of the same name -- also reached the top 20 in 1966.

According to the book ''The Beatles: The Biography'' by Bob Spitz, McCartney had started writing ''A World Without Love'' as a teenager. By the time the Beatles reached the top in 1963-64, it wasn't up to their current standard, and it had also been rejected by another singer as ''too soft.''

McCartney then rewrote it a bit and gave it to Asher. He and Waller ''sang it with a pleasant laid-back yearning that transformed the song into a perfectly acceptable pop hit,'' Spitz wrote.

Peter Asher's Web site says Peter and Gordon had nine Top 20 records from 1964 until they split in 1968.

''Gordon played such a significant role in my life that losing him is hard to comprehend -- let alone to tolerate,'' Asher said in a statement. ''Gordon remains one of my very favourite singers of all time and I am still so proud of the work that we did together. I am just a harmony guy and Gordon was the heart and soul of our duo.''

After the duo broke up, Asher went on to a long career as a producer. Working for the Beatles' Apple records, he produced James Taylor's first album. In the 1970s, he produced other Taylor albums as well as Linda Ronstadt's string of hits.

Waller was born in Braemar, Scotland. He met Asher at Westminister School in London, according to the duo's MySpace page.

Peter and Gordon, who both played acoustic guitar during their shows, reunited in 2005 for occasional performances. They had several dates this year, including two shows in Kentucky Aug. 27 and 28 and one at the Mohegan Sun casino in Connecticut on Nov. 29.

On his own Web page, Gordon said his time with Asher was ''some of the happiest moments of my life.''

''I was able to tour with the Beatles in (1966) and see the world with Peter Asher and most of all play the music that I love,'' Gordon said on his Web page. ''I still follow the same simple philosophy today and that is if it sounds good and the words mean something then you have a good song.''