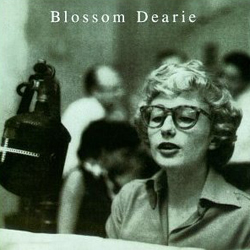 Blossom Dearie, the singer and songwriter whose sweet soprano voice, harmonically innovative piano stylings and sophisticated performances made her a popular attraction in jazz and cabaret for nearly half a century, has died. She was 82.

Dearie died Saturday morning at her home in New York City, her manager Donald Schaffer told The Times. He said she had been in failing health for several years and died of natural causes

Critic Leonard Feather once described Dearie as "chic, sleek and squeaky clean, a voice in a million" and while she was clearly classified as a jazz vocalist, she found that description incomplete.

"I don't want to be called a jazz singer," she told Feather some years ago, "though I certainly have some roots there. I'm not a cult singer either . . . and after being called a legend, that sounds too much like an epitaph. I think of myself as a songwriter's singer. All the great Broadway and Hollywood teams are in my repertoire, along with contemporary people like Dave Frishberg. . . . Writers bring their songs to me because they rely on me to define their work with respect. That's very flattering."

Marguerite Blossom Dearie was born in East Durham, N.Y., on April 19, 1926. She got her unusual middle name from a neighbor who delivered peach blossoms to her house the day she was born.

Dearie studied classical music as a child, switched to jazz as a teenager and played with her high school dance band.

She moved to New York in the 1940s to pursue a serious musical career and was hired by Woody Herman to sing with his Blue Flames, a vocal group within his big band. She later had a similar gig in Alvino Rey's band.

In the early 1950s, she moved to Paris and formed an eight-member vocal group, the Blue Stars.

They had a hit in Paris and the United States with a French version of "Lullaby of Birdland." Dearie contributed several of the group's popular arrangements.

While in Paris, she worked with singer Annie Ross and was later signed to a contract with Verve Records by producer Norman Granz. She made six solo albums for Verve, including the highly regarded "My Gentleman Friend."

After returning to New York in the mid-1950s Dearie came to prominence leading trios with guitarist Herb Ellis and bassist Ray Brown. She started to make her mark on television as a guest on shows hosted by Jack Paar, Dave Garroway and Merv Griffin.

She made albums for Capitol Records in the 1960s, including "May I Come In?," a collection of standards arranged and conducted by Jack Marshall.

But by the early 1970s, major record labels were switching to rock 'n' roll and showed little interest in her work. She started her own company, Daffodil Records, and one of her early albums, "My New Celebrity Is You," included eight of her own compositions. The album's title number was written by Johnny Mercer and is believed to be one of his last compositions before his death in 1976.

As a songwriter, Dearie was best known for her collaborations on "I'm Shadowing You," again with lyrics by Mercer; "I Like You, You're Nice," "Sweet Georgie Fame," "Inside a Silent Tear" and "Hey John."

In the 1970s, she lent her voice to the children's educational program "Schoolhouse Rock!" on songs, including "Mother Necessity," "Figure Eight" and "Unpack Your Adjectives."

Dearie was also known for performing several songs by Frishberg, including "Peel Me a Grape," "I'm Hip" and "My Attorney Bernie."

As her health declined, she stopped performing about three years ago, Schaffer said.

Survivors include her older brother, Barney.