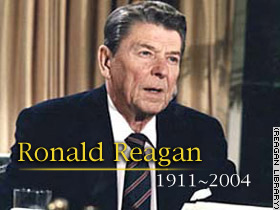 At least two of his children and his wife, Nancy, were at his bedside, according to the former president's Los Angeles office.

Ron Reagan Jr. and Patty Davis -- children from his current marriage to Nancy Davis Reagan -- were with him, the office said.

Michael Reagan, his adopted son from his first marriage to actress Jane Wyman, might have been with his father or was still en route. Maureen Reagan, his daughter from that marriage, died in 2001.

In a statement earlier Saturday, Joanne Drake, Reagan's chief of staff in Los Angeles, said: "He is 93 years old. He has had Alzheimer's disease for 10 years. There are plenty of rumors. When there is something significant to report, I will do so."

The news came as President Bush toured Europe to honor the heroes of World War II on the weekend of the 60th anniversary of the D-Day invasion.

Alzheimer's is a progressive, irreversible, incurable neurological disorder that causes losses of memory and mental abilities -- eventually leading to dementia, according to the Mayo Clinic Web site.

"Ronnie's long journey has finally taken him to a distant place where I can no longer reach him," she said. "Because of this I'm determined to do whatever I can to save other families from this pain."

She also called for increased funding for stem-cell research, which has shown promise as a potential treatment for Alzheimer's and other conditions, such as Parkinson's disease.

"Now science has presented us with a hope called stem cell research, which may provide our scientists with many answers that have for so long been beyond our grasp," Reagan told an audience in Los Angeles. "I just don't see how we can turn our backs on this."

Human stem-cell research is controversial, because it uses cells harvested from newly fertilized embryos. Bush signed an executive order in 2001, banning the use of federal funds to harvest new lines of stem cells for medical research.

Assassination attempt
Reagan disclosed in November 1994 in a passionate letter to the American people that he has Alzheimer's disease. Reagan faded from public view a short time later and has been rarely seen outside his home.

The former Hollywood film actor stopped going to his Century City office in 1999 but still made trips to parks and enjoyed strolls on the Venice Beach boardwalk with his Secret Service contingent.

At 69, Reagan was the oldest man elected president when he was chosen on November 4, 1980, over incumbent Democrat Jimmy Carter.

On March 30, 1981, Reagan was leaving a Washington hotel after addressing labor leaders when John Hinckley fired six gunshots at him. A bullet lodged an inch from Reagan's heart, but he recovered fully.

In 1984, he defeated Democrat Walter Mondale.

Reagan has also undergone a 1985 colon cancer operation and 1987 prostate and skin-cancer surgery.

He fell and broke his hip in 2001, less than a month before his 90th birthday.