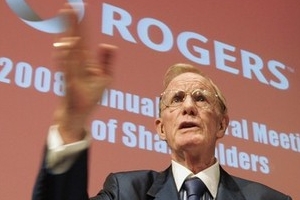 TORONTO -- Ted Rogers, who transformed a single Toronto FM radio station into the North American broadcasting, publishing and telecoms conglomerate Rogers Communications, died Tuesday at his home in Toronto. He was 75.

He was hospitalized in late October for a heart condition.

Long listed as one of Canada's wealthiest people, Rogers was a highly regarded businessman, even by some of his fiercest rivals, and is seen as a radio and wireless telephone pioneer. He started his company in 1960 with a CAN$85,000 loan.

Bespectacled, tall and sandy-haired, Rogers was known as a workaholic, a demanding boss and a stubborn leader.

In his recent autobiography, "Relentless: The True Story of the Man Behind Rogers Communications," Rogers described the resistance he faced when he asked his board of directors to invest about CAN$500,000 ($403,000 in today's currency) in wireless technology in 1983.

"Every board member voted against me, even my wife," he wrote. "They forced me to put my own money on the line, which I did. I just knew wireless was the next big thing and I wasn't about to miss it."

"He defined what cable television was in Canada for an entire generation of Canadians, and then he went well beyond it by creating a dominant, full-line telecommunications giant," said Carmi Levy, an independent technology analyst. "His passing leaves a huge vacuum to fill."

Edward Samuel Rogers Jr. was born May 27, 1933, in Toronto. His father, Edward Rogers Sr., was a pioneer of Canadian radio. A prominent philanthropist, the younger Rogers was made an Officer of the Order of Canada in 1990. In 1994, he was inducted into the Canadian Business Hall of Fame.

"No Canadian of his generation achieved more and gave more back than Ted Rogers," said John Tory, Ontario Progressive Conservative Leader and a former Rogers Communications executive. "He was a visionary, an entrepreneur and a nationalist. People are often described as great Canadians; Ted Rogers represented the gold standard when it comes to great Canadians."

"Ted Rogers was one of the greatest entrepreneurs and builders our country has ever seen," CTVglobemedia CEO Ivan Fecan said. "I admired him enormously. For us at CTVglobemedia, he was both a wonderful partner and very tough competitor."

Phil Lind, Rogers' vice chairman, who worked with the founder for almost 40 years. "Though Ted was relentless in business and building this company over the years, he was also very much a family man," he said. "His impact on family, community and country was as impressive as his business success."

Videotron also honored Rogers' passing Tuesday, with CEO Robert Depatie referring to him as a "top-flight entrepreneur" and "an unparalleled leader."

Rogers Communications said it plans to form a special committee to select the next CEO and will consider internal and external candidates.

Among those who analysts believe will be considered are Rogers' son, Edward Rogers, the head of the company's cable operations, and Melinda Rogers, senior vp strategy and development.

Also touted for the corner office is COO Nadir Mohamed.

"I tend to lean toward Nadir," Levy said of a potential successor. "He has been more integral to the operations of the company than anyone up until now."

While a successor is being chosen, Alan Horn, who assumed the role of CEO when Rogers was admitted to hospital, will remain in that position.