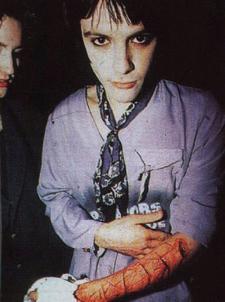 LONDON -- Missing Manic Street Preachers guitarist and songwriter Richey Edwards has been declared as presumed dead, 13 years after he disappeared, a spokesman for the band said on Monday.

"There has been a change in his legal status," said the spokesman for the Welsh rock band, adding that his parents had been granted a court order to that effect.

Edwards disappeared in February, 1995, when the 27-year-old musician's car was found abandoned near the Severn Bridge linking England and Wales.

Despite alleged sightings of the guitarist since his disappearance, he is widely believed to have taken his own life.

According to British media reports, Edwards's estate is worth around 380,000 pounds after death duties are deducted. A missing person can be declared legally dead after seven years but his parents have taken nearly twice that length of time to do so.

Welsh news web site www.walesonline.co.uk quoted David Ellis, the Edwards family lawyer, as saying they had had a change of heart that reflected "an acceptance that his affairs have got to be sorted."

"That's not the same as an acceptance that he is dead," he added.

Earlier this month the other members of the band said on their web site that they were making a new record featuring lyrics left behind by Edwards.

"Finally it feels like the right time to use them."