Studs Terkel, You Will Be Missed 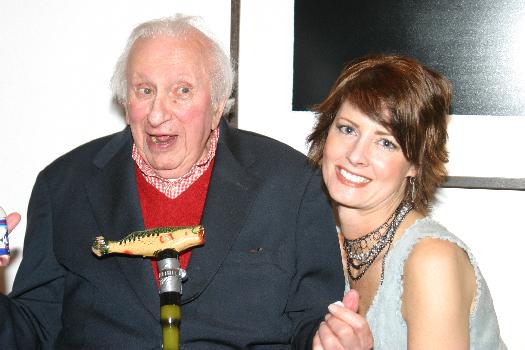 The author, oral historian, rabble-rouser and grand old man of the American left died Friday at 96.

Michael Moore on the Election, the Bailout, Healthcare, and 10 Proposals for the Next President
Amy Goodman

How to Make Your Vote as Easy as Possible: An Online Guide
Steven Rosenfeld


Get AlterNet in
your mailbox!


Advertisement
When Studs Terkel was in the seventh grade, his teacher, Miss Henrietta Boone, asked the smart young whippersnapper who he was supporting in the presidential election of 1924.

"Are you for Calvin Coolidge or John W. Davis?" Miss Boone inquired, mentioning the names of the Republican and Democratic nominees.

Terkel, who had already imbibed the radicalism of Chicago's labor left, was for neither of the major party candidates. Rather, he favored the third-party contender who was campaigning against imperialism abroad and Wall Street at home.

"Innocently--or was I damnably perverse even then?--I piped, 'Fightin' Bob La Follette,'" Terkel recalled eight decades later, mentioning the name of the progressive senator from Wisconsin who earned his support that year. "She was startled, poor dear. Why have I always upset such gentle hearts? Why couldn't I have been my cute little button self and said the right thing: 'Keep Cool with Coolidge.'"

Studs could be cute, and damnably perverse.

But the Pultizer Prize-winning author, pioneering radio personality, battler against Joe McCarthy and McCarthyism, raconteur, rabble-rouser and grand old man of the American left, who died Friday at age 96, never pulled his punches when it came to politics.

Early in 2002, as George Bush was scheming in 2002 to exploit the fear of terrorism in order to steer the United States toward a new career of empire, I wrote an article for The Nation about the lonely dissents of Ohio Congressman Dennis Kucinich.

Studs responded, as he had to La Follette's call eighty years earlier:

"When I finished reading John Nichols's exhilarating communiqu from California ("Kucinich Rocks the Boat," March 25), the bells began to ring," he wrote for The Nation. "In his speech to the Southern California Americans for Democratic Action, criticizing Bush's conduct of the war on terrorism, Dennis Kucinich set the crowd on its ear--one standing ovation after another. Sure, they were all liberals, but what counted was the response on the Internet. The Cleveland Congressman's e-mail box was stuffed to overflowing with 20,000-plus enthusiastic letters. Among them was the call: Kucinich for President."

"Kucinich is the man to light the fire," Studs declared. "Amen."

As it turned out, Kucinich didn't get any closer to the presidency than did La Follette.

Studs was disappointed, but undaunted.

Politics was never a game for Studs. It was the work of a lifetime. He wrote brilliant books about the lives of working people not merely because their stories were fascinating but because he wanted to get a conversation started about class in America.

He wrote about "the good fight" of World War II because he wanted to remind new generations of Americans that this country had once united to battle fascism.

And he kept his sense of humor and his optimism, even when those around him despaired.

Not long after the invasion of Iraq, when President Bush was still enjoying the ill-gotten high approval ratings of his "Mission Accomplished" moment, Studs explained to me that one of the benefits of his advancing years was his pronounced loss of hearing.

"My bad hearing leads me to higher truths," he quipped. "For instance, terms like 'embedded journalist' come through to me as in-bed with journalist. My problem with the media right now is that we've got too many in-bed-with-journalists and not enough of the skeptical, questioning, challenging journalists who will hold George Bush and his boys accountable."

For Studs, who had made his name as an incisive radio interviewer, the increasing consolidation of radio station ownership, and the homogenization that went with it, was deeply troubling. But Studs was not only concerned about the sector of media he knew best.