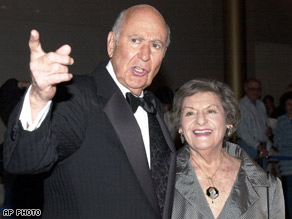 LOS ANGELES, California (AP) -- Estelle Reiner, who uttered the famous line, "I'll have what she's having," after watching Meg Ryan fake an orgasm in the movie "When Harry Met Sally," has died. She was 94.

Besides a handful of movie roles, Reiner was a painter and late in life became a jazz singer. During the Vietnam War, she was one of the organizers of the group Another Mother For Peace.

In "When Harry Met Sally," Ryan and Billy Crystal are sitting in a restaurant, arguing over whether women can realistically fake orgasms when Ryan demonstrates that they can.

After her vocal display, Reiner, seated at another table, quickly says, "I'll have what she's having."

Reiner had small roles in several other movies, including "The Man With Two Brains," which her husband directed, and "Fatso," directed by her friend, the late Anne Bancroft.

Reiner was 65 when she began a career as a jazz singer. Over the next 28 years, she recorded seven albums and performed in clubs in New York and Los Angeles.