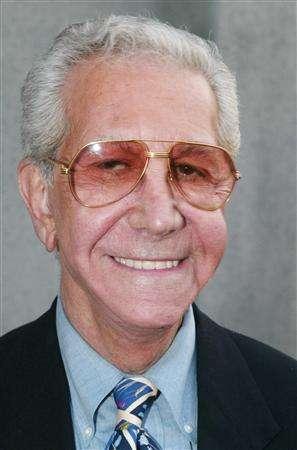 LOS ANGELES (AP) — Mr. Blackwell, the acerbic designer whose annual worst-dressed list skewered the fashion felonies of celebrities from Zsa Zsa Gabor to Britney Spears, has died. He was 86.

He died Sunday of complications from an intestinal infection, publicist Harlan Boll said.

Mr. Blackwell, whose first name was Richard, was a little-known dress designer when he issued his first tongue-in-cheek criticism of Hollywood fashion disasters for 1960 — long before Joan Rivers and others turned such ridicule into a daily affair.

Year after year, he would take Hollywood’s reigning stars and other celebrities to task for failing to dress in what he thought was the way they should.

Being dowdy was bad enough, but the more outrageous clothing a woman wore, the more biting his criticism. He once said a reigning Miss America looked “like an armadillo with cornpads.”

A few other examples:

Madonna: “The Bare-Bottomed Bore of Babylon.”

Barbra Streisand: “She looks like a masculine Bride of Frankenstein.”

Christina Aguilera: “A dazzling singer who puts good taste through the wardrobe wringer.”

Meryl Streep: “She looks like a gypsy abandoned by a caravan.”

Lindsay Lohan: “From adorable to deplorable.”

Patti Davis: “Packs all the glamour of an old, worn-out sneaker.”

Ann Margret: “A Hells Angel escapee who invaded the Ziegfeld Follies on a rainy night.”

Camilla Parker-Bowles: “The Duchess of Dowdy.”

Bjork: “She dances in the dark — and dresses there, too.”

Mr. Blackwell acknowledged he had mixed feelings about appearing so publicly mean. Most of the women he put through the wringer, he said, were people he genuinely admired for their talent if not their fashion sense.

“The list is and was a satirical look at the fashion flops of the year,” he said in 1998. “I merely said out loud what others were whispering. ... It’s not my intention to hurt the feelings of these people. It’s to put down the clothing they’re wearing.”

He told The Los Angeles Times in 1968 that designers were forgetting that their job “is to dress and enhance women. ... Maybe I should have named the 10 worst designers instead of blaming the women who wear their clothes.”

Surprisingly, the woman who topped his worst dressed list for 1982 (announced in early 1983) was the newly married Diana, Princess of Wales. He said she had gone from “a very young, independent, fresh look” to a “tacky, dowdy” style. She quickly regained her footing and wound up as a regular on Mr. Blackwell’s favorites list, the “fabulous fashion independents.”

Mr. Blackwell had started out as an actor himself, having been spotted by a talent agent while still in his teens. He landed a job as an understudy in the Broadway production of Sidney Kingsley’s heralded drama “Dead End.”

Although he got to the play the role of the Dead End Kids’ leader on stage only one time, it led him to Hollywood where he landed bit parts in such films as “Little Tough Guy” (uncredited) and “Juvenile Hall” (as Dick Selzer).

He abandoned his acting career in 1958 after failing to make it in movies and switched to fashion design. He claimed to be the first to make designer jeans for women, and his salon had begun to attract a few Hollywood names when he issued his first list covering the fashion faux pas of 1960. (Italian star Anna Magnani and Ms. Gabor were among his early victims.)

It quickly brought him the celebrity he had long coveted, and he became a favorite on the TV talk show circuit. He also became for a time, in his words, “The worst bitch in the world.”

He hosted his own show, “Mr. Blackwell Presents,” in 1968 and appeared as himself in such TV shows as “Matlock” and “Matt Houston.”

In 1992, he sued Johnny Carson for claiming that he had added Mother Teresa to his list, saying the comment exposed him to hatred and ridicule. NBC’s response was that the “Tonight Show” host was obviously joking.

“Did you see what he said about Mother Teresa? ‘Miss Nerdy Nun is a fashion no-no,” Mr. Carson had said. “Come on now, that’s just too much.”

During his heyday the issuing of Mr. Blackwell’s annual list was an eagerly anticipated media event.

On the second Tuesday in January he would assemble reporters at his mansion for a lavish breakfast before making a dramatic entrance for the television cameras.

By the turn of the millennium, however, the list had lost its juice and Mr. Blackwell took to issuing it by e-mail.

Born Richard Sylvan Selzer in 1922, he recounted in his autobiography, “From Rags to Bitches,” a troubled, poverty-ridden childhood in which he was variously a truant, thief and prostitute.