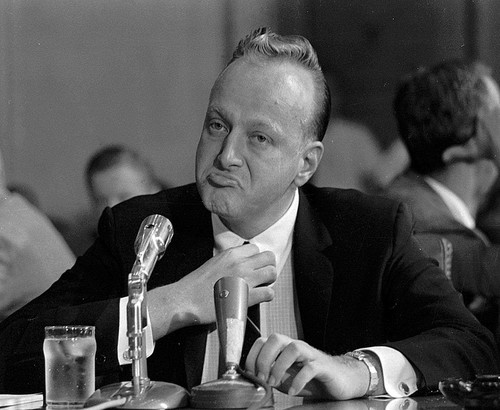 Frank "Lefty" Rosenthal, the onetime Chicago bookmaker who ran four Las Vegas casinos in the 1970s and whose turbulent life and near-death experience with a car bomb inspired the movie "Casino," has died. He was 79.

Rosenthal, who was barred from casinos because of alleged mob ties, died of a heart attack Monday at his home in Miami Beach, a Fire-Rescue spokeswoman told the Associated Press.

Rosenthal, who was once called "the greatest living expert on sports gambling" by Sports Illustrated, is credited with bringing sports betting to Las Vegas casinos in the '70s.

"He really brought the glitz and glamour to what we now know as sports books," Las Vegas Mayor Oscar Goodman said at a news conference Wednesday.

As a casino boss, Rosenthal was a demanding perfectionist who "wouldn't tolerate anything except the very best in customer service," said Goodman, who first represented Rosenthal as a young attorney in 1972.

One time, he recalled, when Rosenthal was walking through the Stardust and saw a cigarette butt on the casino floor, he picked it up himself -- then fired the person who was responsible for cleaning the area.

Although Goodman said Rosenthal always treated him "decently," Rosenthal once ordered his casino security men to crush the right hand of a card cheat he had caught.

"He was part of a crew of professional card cheats, and calling the cops would do nothing to stop them, so we used a rubber mallet -- metal hammers leave marks, you know -- and he became a lefty," Rosenthal recalled in a 2005 interview with the Miami Herald.

"I didn't care if they tried to scam other houses," he said. "I just wanted to make it clear that they couldn't do it at mine."

Rosenthal was a tall and lanky man with what a Fort Lauderdale Sun-Sentinel writer a decade ago described as "a glare that makes him look like a menacing Fred Astaire." When asked how he stayed in such good shape, he responded, "By keeping my mouth shut."

Rosenthal, who during his Las Vegas heyday also hosted his own local TV talk show featuring celebrity guests such as Frank Sinatra and Muhammad Ali, was a man with a past.

Before a Senate hearing on gambling and organized crime in 1961, he invoked the 5th Amendment protection against self-incrimination more than 35 times, including when asked if he was left-handed.

In North Carolina in 1962, he was convicted for trying to bribe an amateur athlete.

After arriving in Las Vegas in 1968, Rosenthal launched a betting parlor. Wiretapped by the FBI, he was indicted on federal bookmaking charges, but a judge threw the case out on a technicality.

In 1969, Rosenthal had married Geri McGee, a statuesque blond and former topless showgirl, with whom he had two children.

The couple later divorced, after she had an affair with Rosenthal's Chicago boyhood friend, Anthony "Tony the Ant" Spilotro, who had moved to Vegas.

At the urging of his wife, Rosenthal got a job in a casino.

He was working as a floor manager at the Stardust Hotel and Casino in 1974 -- "The only guy below me was the shoeshine man," he later said -- when he was appointed to a $250,000-a-year executive position with Argent Corp., which owned or controlled the Stardust, Hacienda, Fremont and Marina hotel-casinos.

But in 1976, the state Gaming Commission ruled that Rosenthal was unsuitable for licensing to run casinos, partly on grounds of alleged organized crime associations.

Rosenthal always denied any charges of mob involvement or skimming profits from the casinos he managed.