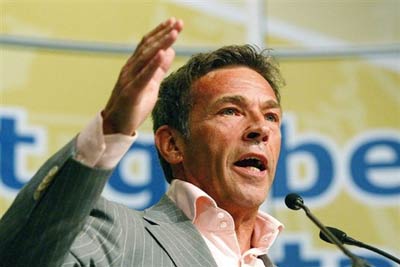 VIENNA, Austria -- Austrian politician Joerg Haider, whose far-right rhetoric at times cast a negative light on the Alpine republic, has died in a car accident at age 58.

Police said the accident happened early Saturday morning in the south of the country when his car veered off the road near the city of Klagenfurt and overturned. He suffered severe injuries to his face and chest. It was not immediately clear if he died at the scene or in a hospital.

Haider, who was born Jan. 26, 1950 in Upper Austria, was governor of Carinthia and leader of the far-right Alliance for the Future of Austria at the time of his death.

''For us, it's like the end of the world,'' Haider's spokesman, Stefan Petzner, told the Austria Press Agency.

In 1999, Haider received 27 percent of the vote in national elections as leader of the Freedom Party. The party's subsequent inclusion in the government led to months of European Union sanctions over Haider's statements, which were seen as anti-Semitic or sympathetic to Adolf Hitler's labor policies.

Haider had since significantly toned down his rhetoric. Over the summer, he staged a comeback in national politics and helped his Alliance for the Future of Austria significantly improve their standing in Sept. 28 national elections.

Haider and his supporters broke away from the Freedom Party in 2005 to form the new movement meant to reflect a turn toward relative moderation.

In particular, Haider wanted to distance himself from his rightist past, which included a comment in 1991 that the Third Reich had an ''orderly employment policy'' and a 1995 reference to concentration camps as ''the punishment camps of National Socialism.''

Haider, known for his charisma and intelligence, enjoyed tremendous popularity in Carinthia.

He is survived by a wife, two daughters and his mother, whose 90th birthday he and his family had planned to celebrate over the weekend.