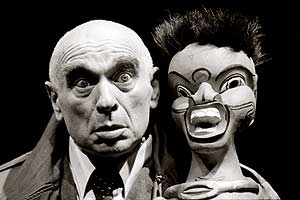 LONDON (AP) - Ken Campbell, a maverick British actor, writer and director whose career ranged from sitcom roles to a 22-hour stage extravaganza, has died, his agent said Wednesday. He was 66.

Campbell was an eccentric talent whose obituary in The Guardian newspaper proclaimed him "one of the strangest people in Britain." One of his plays was titled "I'm Not Mad, I've Just Read Different Books."

Stoddart said Campbell's genius lay in "the excesses of his imagination allied to his extraordinary discipline and intelligence."

"He just wove magic. He was a true original," she said.

Born in Ilford, east London, in 1941, Campbell attended the Royal Academy of Dramatic Art, the training ground of Britain's thespian elite. His work soon drifted from the mainstream, fueled by a love of improvisation and inspirations that ranged from ventriloquism to action hero Jackie Chan.

"I can write a bit; I can direct, but I only really enjoy directing something nobody else will," he once said. "I don't want to join the who-can-do- 'The-Cherry-Orchard' -best competition, because the answer is it wouldn't be me."

In the 1970s he toured British pubs with his ensemble, The Ken Campbell Roadshow, whose members included Bob Hoskins. In 1976 he formed the Science Fiction Theatre of Liverpool, mounting shows including eight-hour sci-fi play cycle "Illuminatus," 22-hour epic "The Warp" and a stage version of Douglas Adams' "The Hitchhiker's Guide to the Galaxy."

His other work included a version of "Macbeth" in the Pidgin language of the South Pacific performed at the National Theatre.

Later Campbell created a series of inventive one-man shows including "Recollections of a Furtive Nudist," "Jamais Vu" and "Mystery Bruises," which he performed around the world.

More mainstream ventures included an appearance on "Fawlty Towers," a role in the 1980s sitcom "In Sickness and in Health" and work presenting science television programs.

In 1980 he pulled off a famous theatrical hoax by sending out letters, allegedly from Royal Shakespeare Company director Trevor Nunn, announcing that following a successful production of "Nicholas Nickleby" the troupe was to be renamed the Royal Dickens Company.

Campbell is survived by his ex-wife Prunella Gee and their daughter Daisy. Funeral details were not immediately available.