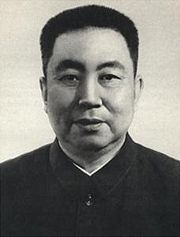 BEIJING -- Hua Guofeng, who briefly ruled China as communist founder Mao Zedong's successor but was pushed aside as a prelude to reforms that launched an economic boom, died Wednesday at the age of 87, state-run media reported.

He took power after Mao's death in September 1976, but saw his powers erode until Deng Xiaoping took control two years later. Hua was forced out as Communist Party chairman in 1981 and slipped into obscurity.

In contrast to the harsh purges of earlier eras, when fallen leaders were banished to remote villages, Hua remained part of the inner circle as a member of the party's Central Committee.

Shortly after Hua took power, Mao's widow, Jiang Qing, and other members of the Gang of Four were arrested, marking the end of the violent 1966-76 Cultural Revolution. But it wasn't clear whether Hua played any part in the arrests.

When he was forced out as party leader in 1981, one stated reason was that Hua had continued to espouse the ultraradical ideals of the Cultural Revolution.

Little is known about Hua's final years. Some reports said he resigned from the party for health reasons in 2001, the year he turned 80, but the government didn't confirm that.

Born to a poor family in 1921, Hua became a guerrilla fighter in Mao's communist movement at 15 when it was battling for survival against Chiang Kai-shek's ruling Nationalists.

After the 1949 revolution, Hua served in provincial government and party posts until he was named to the Central Committee in 1969. He became party secretary of Hunan, Mao's home province, the following year.

Hua was named vice premier in 1975 and then premier, succeeding the late Zhou Enlai.

After Mao's death, as rival factions struggled for power, Hua became a compromise candidate to head the party. Mao was said to have told him, ''With you in charge, I'm at ease.''

Hua was described in the official press as ''the wise'' leader, a step below Mao, the former ''great leader.''

When Hua took power, China was in the grip of the Cultural Revolution, launched by Mao as an attack on potential rivals. Millions were persecuted while the economy was pushed to the brink of collapse.

The arrests of the Gang of Four symbolically ended the era of upheaval and self-imposed isolation.

Hua made a highly publicized trip to Eastern Europe in 1978 and visited Britain the next year.

But Deng, who saw Hua as an obstacle to his economic plans, already was maneuvering to replace him. Deng had been purged in Mao's final years but was restored to his official posts in July 1977.

Hua resigned as premier in September 1980 and was replaced by economist Zhao Ziyang, a Deng protege. The following year, Deng had Hua replaced as party secretary general by Hu Yaobang.

Both Zhao and Hu would later be dismissed by Deng -- Hu in the mid-1980s after he was blamed for allowing student protests and Zhao after the 1989 Tiananmen Square pro-democracy demonstrations.

Early state media reports credited Hua with presiding over the downfall of the Gang of Four.

But by February 1979, papers quoted him as saying he wanted the ''wise leader'' tag dropped. In December 1980, he no longer was cr