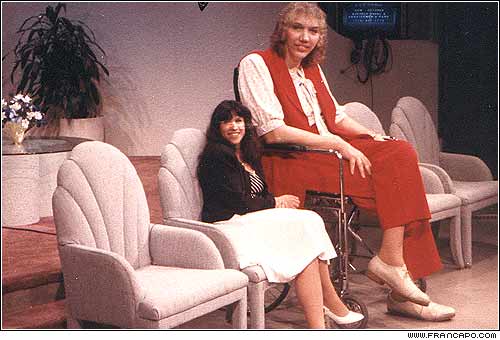 INDIANAPOLIS - A woman who grew to be 7 feet, 7 inches tall and was recognized as the world's tallest female died early Wednesday, a friend said. She was 53.

Sandy Allen, who used her height to inspire schoolchildren to accept those who are different, died at a nursing home in her hometown of Shelbyville, family friend Rita Rose said.

The cause of death was not yet known. Allen had been hospitalized in recent months as she suffered from a recurring blood infection, along with diabetes, breathing troubles and kidney failure, Rose said.

Allen said a tumor caused her pituitary gland to produce too much growth hormone. She underwent an operation in 1977 to stop further growth.

But she was proud of her height, Rose said. "She embraced it," she said. "She used it as a tool to educate people."

Allen appeared on television shows and spoke to church and school groups to bring youngsters her message that it was all right to be different.

She wrote to Guinness World Records in 1974, saying she would like to get to know someone her own height.

"It is needless to say my social life is practically nil and perhaps the publicity from your book may brighten my life," she wrote.

"It kind of brought her out of her shell," Rose said. "She got to the point where she could joke about it."

In the 1980s, she appeared for several years at the Guinness Museum of World Records in Niagara Falls, Ontario.

"I'll never forget the old Japanese man who couldn't speak English, so he decided to feel for himself if I was real," she recalled with a chuckle when she moved back to Indiana in 1987.

"At Guinness there were days when I felt like I was doing a freak show," she said. "When that feeling came too often, I knew I had to come back home."

Difficulty with mobility had forced Allen to curtail her public speaking in recent years, Rose said. She had suffered from diabetes and other ailments and used a wheelchair to get around.

Rose is working to set up a scholarship fund in Allen's name, with proceeds going to Shelbyville High School.

"She loved talking to kids because they would ask more honest questions," Rose said. "Adults would kind of stand back and stare and not know how to approach her."