Aleksandr Solzhenitsyn Is Dead at 89 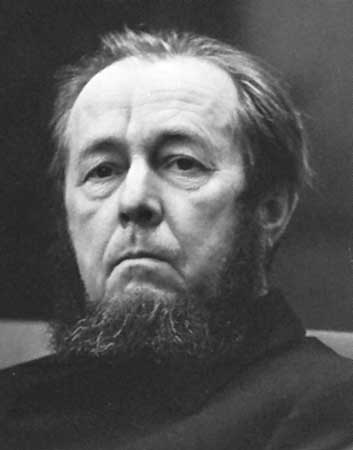 MOSCOW (AP) -- Aleksandr Solzhenitsyn, the Nobel Prize-winning author whose books chronicled the horrors of the Soviet gulag system, has died of heart failure, his son said Monday. He was 89.

Solzhenitsyn's unflinching accounts of torment and survival in the Soviet Union's slave labor camps riveted his countrymen, whose secret history he exposed. They earned him 20 years of bitter exile, but international renown.

And they inspired millions, perhaps, with the knowledge that one person's courage and integrity could, in the end, defeat the totalitarian machinery of an empire.

Beginning with the 1962 short novel "One Day in the Life of Ivan Denisovich," Solzhenitsyn devoted himself to describing what he called the human "meat grinder" that had caught him along with millions of other Soviet citizens: capricious arrests, often for trifling and seemingly absurd reasons, followed by sentences to slave labor camps where cold, starvation and punishing work crushed inmates physically and spiritually.

His "Gulag Archipelago" trilogy of the 1970s shocked readers by describing the savagery of the Soviet state under the dictator Josef Stalin. It helped erase lingering sympathy for the Soviet Union among many leftist intellectuals, especially in Europe.

But his account of that secret system of prison camps was also inspiring in its description of how one person -- Solzhenitsyn himself -- survived, physically and spiritually, in a penal system of soul-crushing hardship and injustice.

The West offered him shelter and accolades. But Solzhenitsyn's refusal to bend despite enormous pressure, perhaps, also gave him the courage to criticize Western culture for what he considered its weakness and decadence.