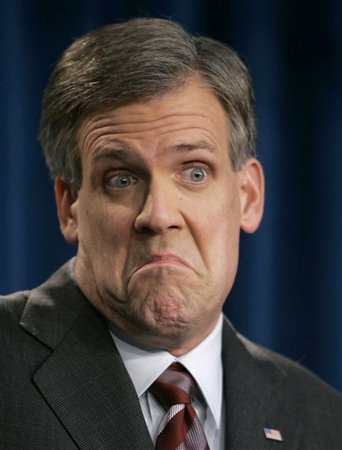 WASHINGTON - Tony Snow, a conservative writer and commentator who cheerfully sparred with reporters in the White House briefing room during a stint as President Bush's press secretary, died Saturday of colon cancer. He was 53.

America has lost a devoted public servant and a man of character," President Bush said in a statement from Camp David, where he was spending the weekend. "It was a joy to watch Tony at the podium each day. He brought wit, grace, and a great love of country to his work."

Snow, who served as the first host of the television news program "Fox News Sunday" from 1996 to 2003, would later say that in the Bush administration he was enjoying "the most exciting, intellectually aerobic job I'm ever going to have."

Snow was working for Fox News Channel and Fox News Radio when he replaced Scott McClellan as press secretary in May 2006 during a White House shake-up. Unlike McClellan, who came to define caution and bland delivery from the White House podium, Snow was never shy about playing to the cameras.

With a quick-from-the-lip repartee, broadcaster's good looks and a relentlessly bright outlook — if not always a command of the facts — he became a popular figure around the country to the delight of his White House bosses.

He served just 17 months as press secretary, a tenure interrupted by his second bout with cancer. In 2005 doctors had removed his colon and he began six months of chemotherapy. In March 2007 a cancerous growth was removed from his abdominal area and he spent five weeks recuperating before returning to the White House.

"All of us here at the White House will miss Tony, as will the millions of Americans he inspired with his brave struggle against cancer," Bush said.

Snow resigned as Bush's chief spokesman last September, citing not his health but a need to earn more than the $168,000 a year he was paid in the government post. In April, he joined CNN as a commentator.

As press secretary, Snow brought partisan zeal and the skills of a seasoned performer to the task of explaining and defending the president's policies. During daily briefings, he challenged reporters, scolded them and questioned their motives as if he were starring in a TV show broadcast live from the West Wing.

Critics suggested that Snow was turning the traditionally informational daily briefing into a personality-driven media event short on facts and long on confrontation. He was the first press secretary, by his own accounting, to travel the country raising money for Republican candidates.

Although a star in conservative politics, as a commentator he had not always been on the president's side. He once called Bush "something of an embarrassment" in conservative circles and criticized what he called Bush's "lackluster" domestic policy.

Most of Snow's career in journalism involved expressing his conservative views. After earning a bachelor's degree in philosophy from Davidson College in North Carolina in 1977 and studying economics and philosophy at the University of Chicago, he wrote editorials for The Greensboro (N.C.) Record, and The Virginian-Pilot in Norfolk.

Snow left journalism in 1991 to join the administration of the first President Bush as director of speechwriting and deputy assistant to the president for media affairs. He then rejoined the news media to write nationally syndicated columns for The Detroit News and USA Today during much of the Clinton administration.

Robert Anthony Snow was born June 1, 1955, in Berea, Ky., and spent his childhood in the Cincinnati area. Survivors include his wife, Jill Ellen Walker, whom he married in 1987, and three children.