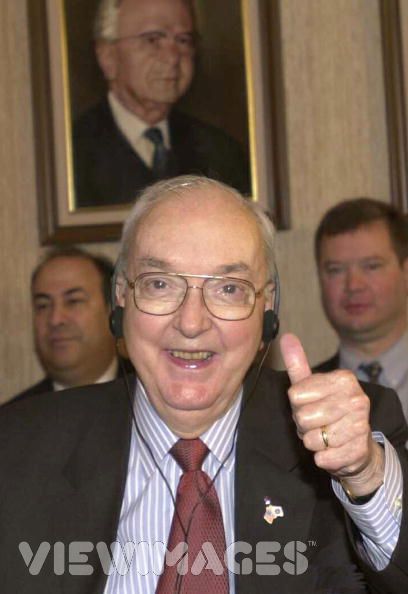 
Former U.S. Sen. Jesse Helms, R-North Carolina, was hailed as a leader of the conservative movement.

Helms once said his job was to derail the freight train of liberalism.

Conservatives admired him for his opposition to abortion and what he called "indecent art," while liberals accused him of using race as a wedge issue to defeat black opponents.

Helms opposed civil rights and a holiday honoring the Rev. Martin Luther King Jr. He was one of a small number of senators who opposed extending the Voting Rights Act in 1982, eventually giving up a filibuster when then-Majority Leader Sen. Howard Baker, a Tennessee Republican, said the Senate would not take up any other business until it acted on the extension.

But Helms wrote in his 2005 memoir "Here's Where I Stand" that he was "not the least bit racist," the New York Times wrote in a review of the book.

The Jesse Helms Center, a private foundation in Wingate, North Carolina, announced on its Web site that Helms died at 1:15 a.m. Friday in Raleigh.

"Today we lost a senator whose stature in Congress had few equals," said Sen. Mitch McConnell of Kentucky, the Senate's Republican leader. "Sen. Jesse Helms was a leading voice and courageous champion for the many causes he believed in."

The cause of death has not been announced. Helms had been ill in recent years.

Helms retired in 2003 after serving five terms in the Senate.

At the time, President Bush said the Senate was "losing an institution."

"Sen. Helms has been a tireless defender of our nation's freedom and a champion of democracy abroad," Bush said.

Helms' hometown newspaper, The (Raleigh) News & Observer, lionized him in 2001 as one of the creators of the modern Republican Party.

"Helms helped broaden the party to include religious conservatives and people who drank not just Chablis but sweet tea, and who drove not just BMWs but pickup trucks," the paper wrote when he announced he was going to retire.

"In doing so, Helms played a pivotal role in moving the Republican Party to the right -- changing the GOP from the party of Gerald Ford and Nelson Rockefeller to the party of Ronald Reagan and Newt Gingrich."

When the GOP was the majority party in the Senate, Helms was chairman of the powerful Foreign Relations Committee, consistently moving U.S. policy toward the right, especially regarding the United Nations and Cuba.

Helms was such a polarizing figure in American politics that both the left and the right invoked his name in fund-raising appeals.

"The business of political causes and issues is a lot like professional wrestling -- there is good and there is evil. And Jesse Helms, to those of us on the left, is evil," Roger Craver, a leading direct-mail fund-raiser for the left, told CNN in 2001 when Helms announced his retirement.

Helms was instrumental in blocking the payment of U.S. dues to the United Nations in an effort to force changes in the world organization. The United States withheld up to $1 billion under a law that came to be known as the Helms-Biden Act. The law demanded reforms of U.N. bureaucracy and a reduction in Washington's contributions to the U.N. peacekeeping budget and general budget.

He also helped prevent the Senate from ratifying the Comprehensive Test Ban Treaty despite appeals from President Clinton.

He also held seats on the Agriculture Committee, looking out for North Carolina's extensive tobacco industry, and on the Senate Rules and Administration Committee. Video Watch how Helms had an impact in politics »

Ed Feulner, president of conservative think tank the Heritage Foundation, hailed Helms as "one of the most consequential figures of the 20th century."

"Along with Barry Goldwater and Ronald Reagan, he helped establish the conservative movement and became a powerful voice for free markets and free people," Feulner wrote.

"The defeat of Soviet communism and the rise of Ronald Reagan would not have happened without his intrepid leadership at decisive times."

Helms was known as "Senator No" for his staunch opposition to an array of liberal causes, including affirmative action, arts funding and gay rights.

"The destruction of this country can be pinpointed in terms of its beginnings to the time that our political leadership turned to socialism," Helms said in an editorial he wrote at WRAL-TV in Raleigh, according to The Associated Press.

"They didn't call it socialism, of course. It was given deceptive names and adorned with fancy slogans. We heard about New Deals, and Fair Deals and New Frontiers and the Great Society."

Helms was accused of race-baiting throughout his career.

"To rob the Negro of his reputation of thinking through a problem in his own fashion is about the same as trying to pretend that he doesn't have a natural instinct for rhythm and for singing and dancing," he wrote in 1956, according to the AP.

Helms faced challenges to his Senate seat from Democrat Harvey Gantt, the black former mayor of Charlotte, North Carolina, in 1990 and 1996.

In the first election, Helms ran a television commercial that showed a pair of white hands crumpling a pink slip as the announcer said: "You needed that job, and you were the best qualified, but they had to give it to a minority, because of a racial quota. Is that really fair? Harvey Gantt says it is. Gantt supports Ted Kennedy's racial quota law that makes the color of your skin more important than your qualifications."
advertisement

In later years, Helms worked with Clinton's secretary of state, Madeleine Albright, and U2 singer Bono to fight AIDS in Africa.

At 80, Helms had an operation to replace a faulty prosthetic heart valve put in place a decade earlier when he had quadruple-bypass surgery.