David Caminer, a Pioneer in Computers, Dies at 92 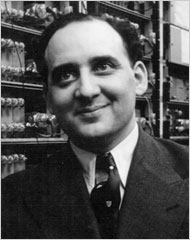 David Caminer, who as an employee of a legendary chain of British tea shops found the earliest ways to use a computer for business purposes, including standardizing flavorful, cost-effective cups of tea, died June 19 in London. He was 92.

The death was announced by the Leo Computers Society, whose purpose is to keep alive the memory of LEO, the computer Mr. Caminer helped develop for J. Lyons & Company. It was the world’s first business computer, a distinction certified by Guinness World Records.

Lyons was the first company in the world to computerize its commercial operations, partly because it had so many of them: it had more than 200 teahouses in London and its suburbs, with each Lyons Corner House daily generating thousands of paper receipts and needing scores of fresh baked items.

In addition to running the tea shops, Lyons catered large events like tennis at Wimbledon and garden parties at Windsor Castle; it also operated hotels, laundries, and ice cream, candy and meat pie companies. And, of course, tea plantations.

As a result, the company required exceptionally efficient office support. So it was only natural it would look at the “electronic brains” that scientists in the United States were developing for scientific and military purposes as a way to streamline its own empire. Mr. Caminer’s role was finding ways to retain traditional clerical rigor while speeding up the company’s logistics and finances many times over.

The result was LEO, its name derived from Lyons Electronic Office. The Economist magazine called it “the first dedicated business machine to operate on the ‘stored program principle,’ meaning that it could be quickly reconfigured to perform different tasks by loading a new program.”

LEO performed its first calculation on Nov. 17, 1951, running a program to evaluate costs, prices and margins of that week’s baked output. At that moment, Lyons was years ahead of I.B.M. and the other computer giants that eventually overtook it.

“Americans can’t believe this,” Paul Ceruzzi, a historian of computing and curator at the National Air and Space Museum, said in an interview last week. “They think you’re making it up. It really was true.”

That a food conglomerate did this seems almost incredible. New Scientist said in 2001: “In today’s terms it would be like hearing that Pizza Hut had developed a new generation of microprocessor, or McDonald’s had invented the Internet.”

David Treisman was born on June 26, 1915, in the East End of London. His father was killed in World War I, and his mother married Felix Caminer. An avid leftist, he decided a university education was irrelevant, obituaries in the London papers said. He joined Lyons as a management trainee in 1936.

During World War II, he lost a leg in combat in Tunisia. He returned to Lyons and soon became manager of the systems analysis office. Lyons sent employees to the United States to study office automation, and American experts said they should go to the University of Cambridge, where Maurice Wilkes was developing an early computer.

Lyons made a deal to help finance Dr. Wilkes’s work in return for his help in building a computer for the company. As work on the hardware progressed, Mr. Caminer drew up a flow chart to show how the different job requirements related. The charts became the basis of the computer code.

Mr. Caminer has been called the first corporate electronic systems analyst, a designation with which Mr. Ceruzzi agreed.

The finished LEO, which had less than 100,000th the power of a current PC, could calculate an employee’s pay in 1.5 seconds, a job that took an experienced clerk eight minutes. Its success led Lyons to set up a computer subsidiary that later developed two more generations of LEO, the last with transistors, rather than the noisy vacuum tubes used in the first two models.

LEOs were sold to the Ford Motor Company, tobacco companies, a steel maker, South Africa, Australia, the Soviet Union and Czechoslovakia, among other buyers. When the British government chose the last LEO to handle its telephone billing system, Tony Benn, postmaster general, praised Lyons for “standing up to and beating on its own merits” the competition from overseas.

But the Lyons computer operation merged into a succession of companies, which chose to use American technology, not least for its universality. Many have compared LEO’s experience with that of the de Havilland Comet, which was the first commercial passenger jet in production but which lost out to Boeing jets.

Mr. Caminer, who was appointed to the Order of the British Empire in 1980 for developing a computer system for the European Common Market, had many explanations for the failure of Lyons to press its advantage. One was that it had no idea how rapidly technology would advance. Another was: “We were too often arrogant about always knowing best.”

Mr. Caminer is survived by his wife, the former Jackie Lewis, a son and two daughters. The remnants of Lyons predeceased him in 1998.

On Jan. 9, 1965, when the first LEO computer was turned off forever, The Daily Mail published an obituary. It recalled how LEO hummed, and once made a noise that sounded like a hornpipe to Prince Philip.

“Let it be remembered that throughout almost 14 years of life he worked a 24-hour shift on one dreary problem after another without complaining and spent, at the most, only a few hours off sick,” the computer’s obituary said.