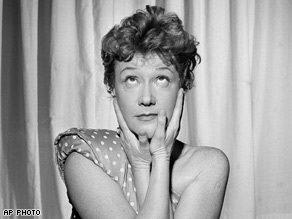 NEW YORK (AP) -- Dody Goodman, the delightfully daffy comedian known for her television appearances on Jack Paar's late-night talk show and as the mother on the soap-opera parody "Mary Hartman, Mary Hartman," has died at 93.

Goodman died Sunday at Englewood (New Jersey) Hospital and Medical Center, said Joan Adams, a close family friend. The actress had been ill for some time and had lived in the Actors Fund Home in Englewood since October, Adams said.

Goodman, with her pixyish appearance and Southern-tinged, quavery voice, had an eclectic show-business career. She moved easily from stage to television to movies, where she appeared in such popular films as "Grease" and "Grease 2," playing Blanche, the principal's assistant, and in "Splash."

It was on "The Tonight Show" when Paar was the late night TV program's second host in the late 1950s that Goodman first received national attention. Her quirky, off-kilter remarks inevitably got laughs and endeared audiences.

"I was just thrown into the talking," Goodman said in a 1994 interview with The Associated Press. "I had no idea how to do that. In fact, they just called me up and asked me if I wanted to be on 'The Jack Paar Show.' I didn't know who Jack Paar was. They said, 'We just want you to sit and talk.' "

After a falling out with Paar, other chat shows took up the slack, including "The Merv Griffin Show" and "Girl Talk." And there were roles on TV series, too, most notably her appearances as Martha Shumway (Louise Lasser's mother) on "Mary Hartman, Mary Hartman," starting in 1976, and guest shots on such shows as "Diff'rent Strokes," "St. Elsewhere" and "Murder, She Wrote."

In later years, Goodman was a regular in "Nunsense" and its various sequels, appearing off-Broadway and on tour in Dan Goggin's comic musical celebration of the Little Sisters of Hoboken. She started out playing Sister Mary Amnesia, later graduating to the role of Mother Superior.

"Dody had the most impeccable comic timing," Goggin said. "When we had her in the show, she was the only person on Earth who could walk on stage, say, 'Are you ready to start?' and bring the house down. Within seconds, the audience was eating out of her hand."

The actress was born Dolores Goodman on October 28, 1914, in Columbus, Ohio, where her father ran a small cigar factory. She arrived in New York in the late 1930s to study dance at the School of American Ballet and the Metropolitan Opera Ballet School, and later graduated to Broadway musicals.

The actress performed regularly on stage in the 1940s and early '50s as a chorus member in such musicals as "Something for the Boys," "One Touch of Venus," "Laffing Room Only," "Miss Liberty," "Call Me Madam," "My Darlin' Aida" and "Wonderful Town," in which she originated the role of Violet, the streetwalker.

"I had to make so many transitions into other things," Goodman said in the AP interview. "When I first came out of dancing, I did revues."

It was the early to mid-'50s, when small, topical nightclub revues flourished. Goodman, a natural comedian, thrived in them. She performed in shows by Ben Bagley and Julius Monk, and in Jerry Herman's first effort, a revue called "Parade."

"He understands my sense of humor. I will do a dumb thing for fun. That's how I got the reputation for being dopey and dumb. I don't like dumb jokes but I will do dumb things for a laugh," she said in the AP interview.